People who have heard of psychologist Mihaly Csikszentmihalyi usually associate him with the concept of “flow” – a mental state in which a person is completely absorbed in a feeling of energized focus. 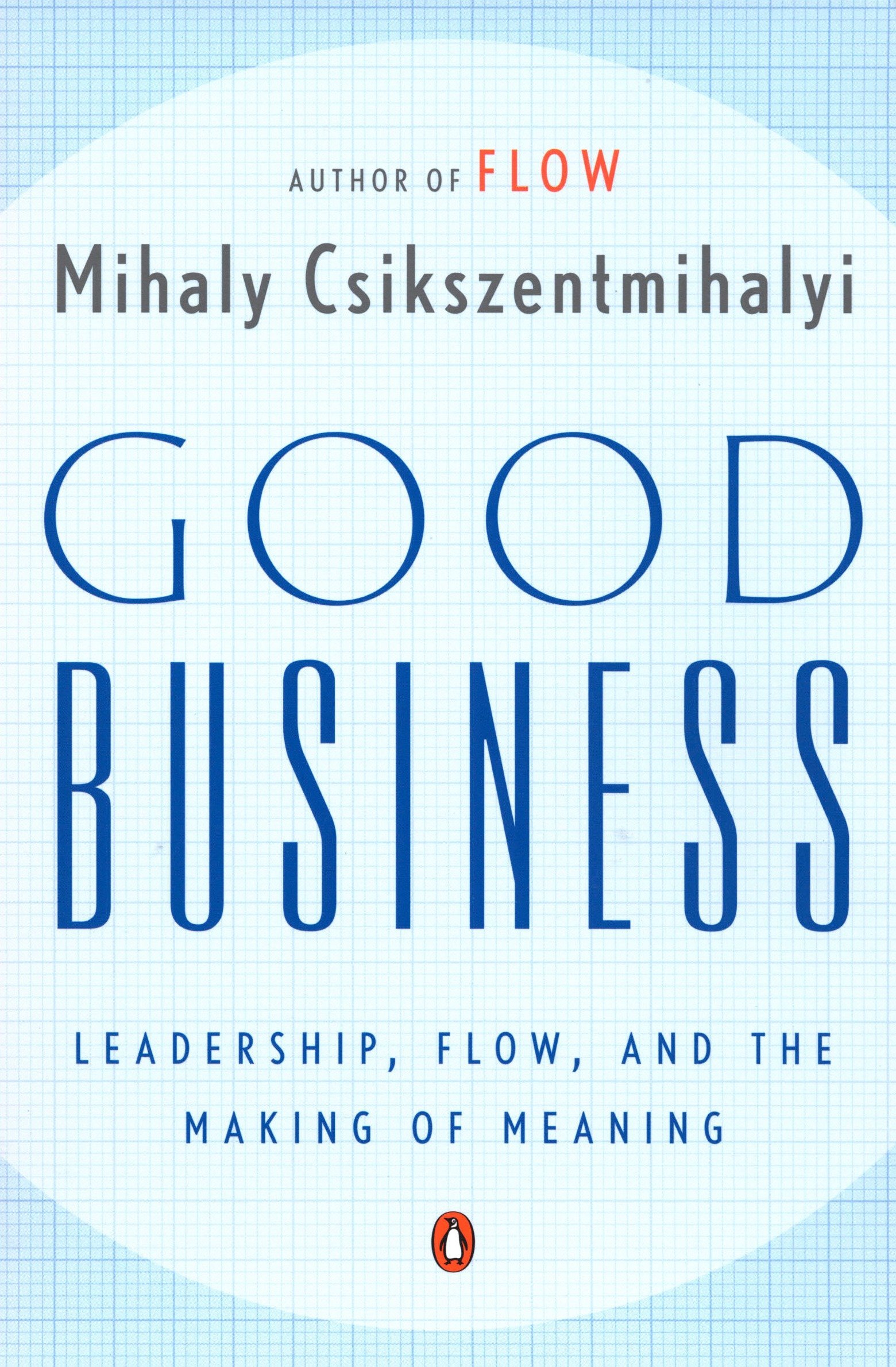 You may imagine yourself reaching such a state playing your favorite sport or pursuing a passionate hobby. But at work?

Yes, indeed. In this book summary, Csikszentmihalyi explains how flow states can be achieved in the work world – to the benefit of both employees and organizations. For one, he outlines how employees can remove common obstacles that block them from being fully engaged in their work tasks. For another, he explains how organizations can set the right conditions for enabling their employees to develop flow states with greater ease.

If you are leading a business, start by articulating a vision that encourages shared goals, personal growth, and worthwhile work. An exemplary model of such a business is the clothing company Patagonia – a firm that found its way to profitability by putting people and the planet first.

Take a look at the scandal-filled headlines, or just read a Dilbert comic strip about cubicle culture, and the message is clear: the business world is cutthroat, unethical, and no fun. But here comes psychologist Mihaly Csikszentmihalyi with a contrarian message. Work should be fun, and companies should care about something aside from the bottom line. Using examples such as clothing maker Patagonia and investment pioneer Sir John Templeton, Csikszentmihalyi makes a convincing case that profits must come after meaning. Patagonia, for instance, lets workers take surf breaks, and Templeton became a model of full engagement. getAbstract suggests this book to any manager seeking a better way to do things, and to any employee hankering for deeper job satisfaction.

Capitalism earned a bad rap in recent years. Corporate scandals revealed business leaders, such as those at Enron, as hypocrites and frauds. Today, many workers view their jobs as unpleasant, and some even see their duties as shameful. This follows a societal shift toward excessive consumption and greed.

“Today business leaders are among the most influential members of society. While they are all trained to generate profits, many of them are oblivious to the other responsibilities that their new societal leadership entails.”

After the September 11, 2001, terror attacks, many politicians and business leaders urged U.S. consumers to keep spending as a way to protect the American way of life. But how fulfilling is a way of life that elevates shopping to its highest duty? Despite pervasive gloom and doom, there is another way. Business leaders can be socially responsible for visionaries. Work can be enjoyable and deeply satisfying, monetary rewards aside.

“The capitalist vision now stands alone on the world stage. Will those who promote it understand and accept the responsibilities that come with the privileges they have been given?”

Stepping onto this brighter path requires only that executives and their employees look to new sources of motivation – passion, conscience, and a sense of duty – rather than cold hard cash, as their main drivers. Business leaders must look to the long term, not just to this quarter’s results. It sounds simple enough, but it requires a new mindset. After all, many business leaders have never learned to hold anything in high regard except turning a profit.

“It is impossible to survive as a leader in business without enjoying what one does. The job would become too stressful, the hours too long, and the temptation to spend more and more time on diversions too strong.”

As history has transformed capitalism into the only economic model that makes sense, capitalists must recognize the responsibility that accompanies their awesome power. This doesn’t mean abandoning the profit motive altogether. It means adopting a more thoughtful profit motive, one that recognizes that employees aren’t emotionless cogs and that there can be other priorities than profits.

“A job that employs only a fraction of one’s skills quickly becomes a burden. One feels that most of one’s potential is left unused, wasted.”

Consider the business philosophy of Yves Chouinard, head of Patagonia, which makes outdoor gear. The company’s headquarters is a refurbished old industrial building near the Pacific Ocean in Ventura, California, a building that was renovated carefully to make workers feel that the company isn’t out for a fast buck but will be around for years. Workers wear shorts and sandals and drop their kids off at an on-site day-care center. Employees line up their surfboards in one part of the building. Chouinard’s rule is that when a swell hits, employees are allowed to go surfing. A rock climber, Chouinard flourished by selling climbing gear to others. But when he saw that the popularity of the sport was marring the mountains, he pioneered a new way of climbing that was gentler to the rock faces. As Patagonia shifted its focus to apparel, Chouinard visited a cotton field and realized that cultivation of the fabric he favored required huge amounts of pesticides. In response, he began buying only organically grown cotton. What is the result of this devotion to conscience rather than the bottom line? Patagonia is a company where employees are happy, and where business practices set a positive example.

Happiness isn’t often discussed in business courses, but it should be. After all, philosophers generally agree that happiness is the highest pursuit for all humans. And while profit is most organizations’ overt motive, businesses exist, in fact, to create products and services that make people happy. The value of any good or service is based on the level of happiness it provides to the buyer. By the same token, happy employees are more productive and valuable than unhappy ones.

“Immediate, specific feedback is one of the most effective tools to help workers improve their performance.”

Happiness comes through fulfilling your unique potential. This is true of any work and it happens in two steps. The first is differentiation, in which you realize that you are a unique person. The second phase is integration, in which you recognize that your individual uniqueness is part of a bigger web of interpersonal and cultural relationships. Someone who is both differentiated and integrated is a complex person, and that complexity provides a key to happiness.

“Just as climbers need a mountain peak to get their juices going, or a surgeon needs a health emergency to get involved, workers need a compelling reason to focus their energies on the job.”

In the workplace, passion and fun are more crucial to happiness than money. Apple Computer co-founder Michael Markkula acknowledges that his sense of personal satisfaction is more important to him than cash. Running a company is so difficult that an executive who doesn’t enjoy it won’t last long. Work-related happiness isn’t the same sort of detached contentment that accompanies sipping a drink on the beach. Flow, the more significant type of happiness, occurs when you are fully engaged and using a variety of skills.

“To bring as much flow into one’s life as possible, the first step one must take is to define one’s priorities – the things one believes are worth living for.”

The surgeon in the operating room feels flow; so does the rock climber on a cliff, the athlete in the midst of a game or the mother playing with her child. Creating such an energized environment among a company’s cubicles might sound far-fetched, but there are a few surefire rules about setting up the right conditions. For flow, you need:

“It is all too easy to become trapped under the glass ceiling of a job and to stop growing.”

You’re probably wondering what flow has to do with the 40 hours or more you spend at the office every week. Sure, flow is easy to achieve if you’re defying death as a rock climber or saving a life as a surgeon. But when was the last time a staff meeting made you completely absorbed and fully involved? Contrary to the popular belief that jobs are mundane roles meant to be tolerated rather than enjoyed, flow can exist in the work world. But before you can create flow, you must recognize the common obstacles that block it:

“To experience flow continuously, one must keep cultivating interest and curiosity, respond to a wide range of opportunities, and develop as many skills as possible.”

Flow on the job is achieved when employees feel that they are working not merely for a salary, but something greater than themselves. Managers should strive to do more than squeeze the most from every employee. Leaders must have the vision to place employees’ emotional needs above market share and profitability.

“To be able to experience flow throughout life, it is necessary to become the master of one’s psychic energy.”

This requires clarifying the company’s mission to everyone, from the top executives to the line managers to the hourly employees. It also means committing to set specific goals and to provide clear, timely feedback to employees. Finally, always remember that you and your employees will find more lasting motivation from meaning than from money.

To maximize your flow, follow the advice of the oracle: know thyself. It’s not as easy as it sounds. Few people can clearly express their basic identities and bedrock values. But to make your life and work fun and purposeful, you need to know exactly what your priorities are. This isn’t a spiritual quest so much as a practical one.

To accomplish your goals, you must first discover yourself. For those whose core values were forged early in life through religion or culture, self-discovery is a straightforward path. For others, it’s a more intellectual pursuit that involves asking questions, such as: Who are your heroes? Who are your anti-heroes? What matters most to you? What values would you cling to at all costs?

The first step to self-knowledge, says Sir John Templeton, is to examine your talents. Templeton once hoped to become a missionary, but he realized that some of his classmates who had the same career in mind seemed better suited to the job. When Templeton was a university student, he became interested in investments – and particularly in the fact that the parents of his classmates didn’t have investments outside any one nation. Armed with this insight, Templeton started one of the first international investment funds.

To keep yourself truly engaged, you must be curious and open-minded, not only at work but in your personal life, as well. You’re likely to work in an organization, one that will wield a huge influence over your life, so be certain to select your employer well.

After self-knowledge comes self-management, which requires manipulating and focusing your attention, time, and habits in ways that match your self-concept. This includes:

Good business, a business that enables flow, is based on vision and visionary leadership, including trying to do your best to achieve excellence, help others, and improve the world.

Psychologist Mihaly Csikszentmihalyi was born in Hungary. He is a professor of psychology at the Peter F. Drucker School of Management at Claremont Graduate University in Claremont, California, where he is also the director of the non-profit Quality of Life Research Center. Csikszentmihalyi’s previous books include Flow: The Psychology of Optimal Experience and The Evolving Self: A Psychology for the Third Millennium.