Do you know that you’ll have dinner tonight? If so, you’re lucky. Nearly a billion people around the world are “food-insecure.” Howard G. Buffett – an Illinois farmer and president of an eponymous foundation endowed by his famous father, billionaire Warren E. Buffett – scours the globe for projects that will help end world hunger. Just as a farmer brings in about 40 harvests over a lifetime, author Buffett tells 40 stories about lessons he’s learned in philanthropy about trying to make a difference. He travels to dozens of countries, funds programs that work, and diagnoses efforts that don’t succeed. He and his son Howard W. Buffett describe their work and their findings in this engaging book. We recommend their illuminating treatise to budding philanthropists; to those interested in conservation farming, sustainability, social issues, and food security; and to everyone who knows what’s for dinner. 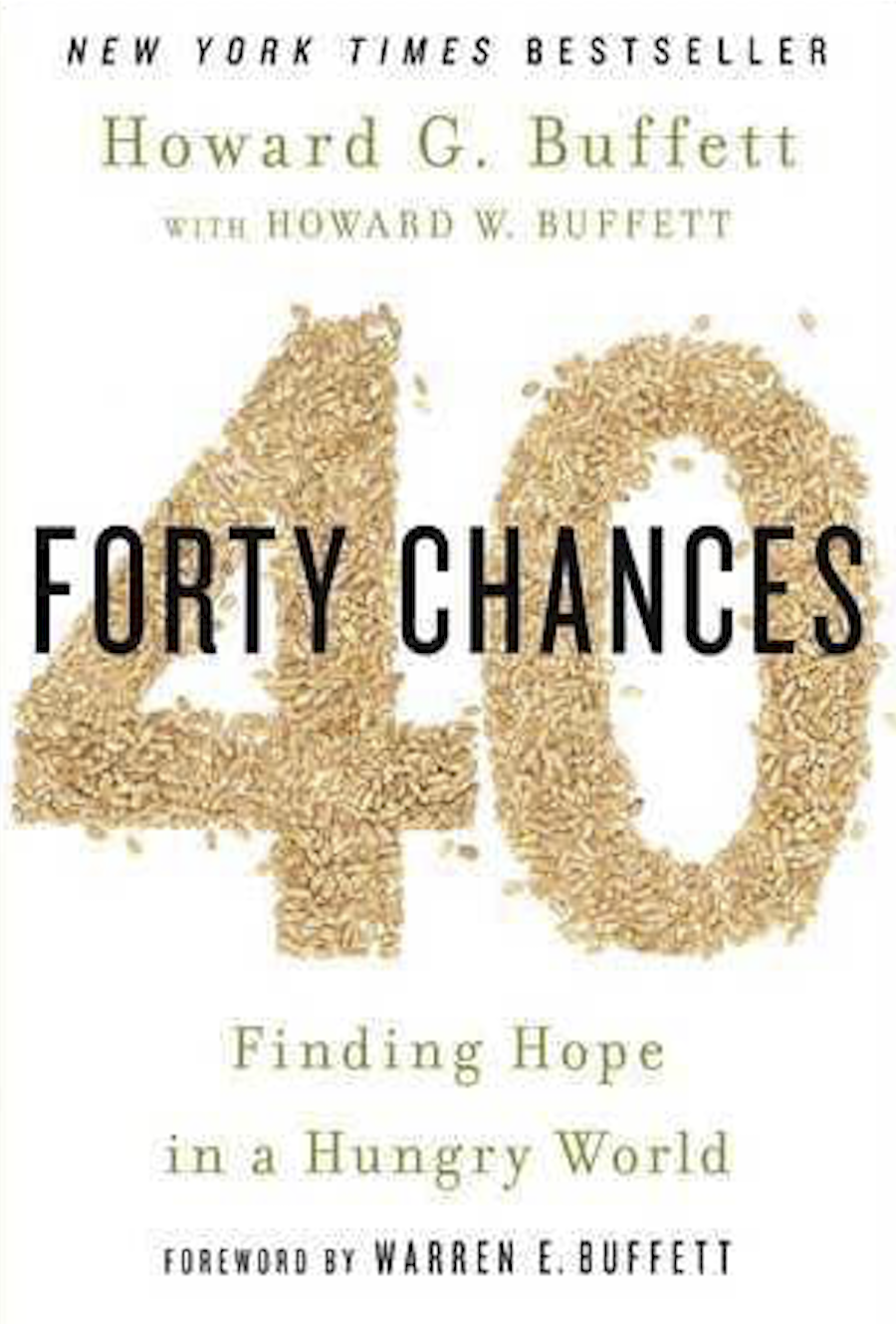 Howard G. Buffett runs “a private foundation focused on addressing global food insecurity.” He also notes, “I farm 1,500 acres in central Illinois.” His father, billionaire investor Warren E. Buffett, gave Howard an enormous grant to start a philanthropic foundation. The elder Buffett challenged his son, asking: “If you had a billion dollars to do something important, what would you choose?” In response to that question, the Howard G. Buffett Foundation has given “more than $200 million in grants” globally to programs combating world hunger that he hopes will help make a difference – not by mounting temporary fixes but by generating “self-sustaining solutions.”

“Wherever they live and no matter how big or small they are, farmers take better care of land if they own it.”

Over a lifetime, a farmer has about “40 chances to plant” a crop. Buffett thinks he has a similar number of years to tackle the problem of world hunger. Worldwide, approximately “879 million people” live in a state of “food insecurity.” Persistent hunger lies at the root of so many of the world’s problems – for instance, lack of education, terror threats, prostitution, armed conflicts, and destruction of natural habitats.

Over the past decades, the developed world and particularly the United States rushed emergency food aid into various nations during different crises to address immediate needs. Quick fixes are just that. Addressing world hunger calls for lasting, sustainable solutions. Attacking food insecurity means bringing bright minds and voices from many different backgrounds to “the table” – people who consider the climates, economies, and cultures afflicted by hunger around the world.

“You’ll get forty chances to plant your crop, adjust to what nature throws at you and hope for the best. It’s enough time to learn to do it well. But it’s not forever.”

Many people don’t understand that Western farming methods – grounded in the rich soil of the American continent’s “fertility belt” – do not easily translate to other environments and soils around the world. However, crafting sustainable, global solutions requires understanding biodiversity. Fighting hunger calls for using a wide range of approaches that aren’t limited to soil conservation, farm subsidies, or organic farming. As a farmer who once worked for the agricultural giant ADM, Buffett learned to appreciate the differences in soil worldwide.

Buffett quickly understood that his foundation had to address hunger around the globe. The problem wasn’t limited to any one country. A look around his hometown, Decatur, Illinois, proved that hungry, malnourished people live everywhere, including in all those cultures where most people have plenty to eat. “One in six Americans is food insecure,” with finances so tight that an emergency or economic downturn can force them to choose between shelter and food.

“To lift people out of the dehumanizing and painful state of food insecurity will always be worth it. And sometimes it will even work.”

Worldwide, up to 20 million children suffer from – and at least one million children under age five die every year from – severe acute malnutrition. In Guatemala, for example, many families don’t appear unhealthy but suffer from “micronutrient deficiency” due to poor diets. Hunger occurs in countries at peace as well as in countries at war, but war almost guarantees hunger. If a nation suffers from unrest, abuses of power, totalitarianism, or internal conflict, its people will be hungry. Food insecurity is linked also to sex trafficking, slavery, and revolution – posing almost insurmountable obstacles to anyone who, like Buffett, addresses the problem of hunger.

“Where there is poverty and conflict, there is always food insecurity. It’s not only physically uncomfortable, but also degrading and dehumanizing.”

In his quest to tackle hunger, Buffett learned the value of firsthand research approaches that make him optimistic. A trip to Malawi, for example, taught him that people who eat termites and rodents are not necessarily starving. And, some efforts are succeeding. For example, crop breeder Joe DeVries spearheads an initiative called Program for Africa’s Seed Systems. With support from the Buffett and Gates Foundations, it “supports the development of research capacity” and builds “the private market for improved seeds, bred to grow in the country’s soil and climate conditions.”

“Linking hunger and education is one of the strategies for battling hunger that works just about everywhere in the world.”

In Colombia, the entertainer and singer Shakira support school-lunch programs that feed hungry children, help them perform better in class, and motivate their parents to send them to school. “If we believe that a school-lunch program is important in the world’s wealthiest country, imagine its value in the poorest countries, where most of the hungry school-age children live.” A team of rangers at Virunga National Park in the Democratic Republic of Congo promotes gorilla tourism to benefit the local economy – so the Congolese don’t destroy gorilla habitats to eat. Funding such endeavors taught Buffett that the best approaches consider local circumstances, economic priorities as well as long-term benefits beyond food security, like education.

Buffett’s travels brought him into contact with failed efforts he calls “hard-learned lessons”; these lessons illustrate how nongovernmental organizations (NGOs) and other well-meaning entities fail through “flawed” planning and implementation. These programs include efforts in the following countries:

Africa: One of the most pressing problems is “access to clean water.” Many organizations mistakenly believe that digging wells offers a quick-fix solution. These charities and their donors insist on tangible actions like well-digging over “spending money on governance or long-term planning.”

Angola: World Vision’s food-aid program ultimately proved unsuccessful due to the restrictive “land tenure” system. Local farmers don’t own their land and can be quickly run off the plots they work. Buffett saw villagers who were starving – but even if he devoted millions of dollars to help them, he realized that “emergency intervention…was not going to change the underlying issues preventing meaningful development.” His Angolan experience clarified his understanding of why charities tackle problems “one project at a time,” and yet fail to solve the problem of hunger.

Ethiopia, Sierra Leone, and Liberia: Land tenure is also an issue in these countries, wherein governments sell land to overseas investors who either transport crops back home or sell them abroad.

Mexico: Nobel Peace Prize winner Norman Borlaug helped launch the “Green Revolution” by breeding a new strain of wheat for starving people in India and Pakistan. But the Borlaug approach is not a panacea for hunger. In India, for example, farmers excessively applying nitrogen fertilizers degraded the soil over time. This also occurs in the Yaqui Valley of Mexico, where farmers who overfertilize also use “furrow irrigation” that washes topsoil away. The Yaqui Valley illustrates how techniques are not transferable from nation to nation, culture to culture, or climate to climate.

Mozambique: Having witnessed a well-coordinated food aid effort in Pakistan after the country was shaken by an earthquake in 2005, Howard G. Buffett was disappointed to find charities in Mozambique engaging in “monetization” – selling donated food to underwrite other projects. Monetization should stop; it unintentionally lowers local food prices. Farmers in Mozambique and elsewhere practice “slash and burn” agriculture – the destruction of the rain forest to create farmland. Slash and burn degrade soil and fuels food insecurity globally.

South Africa: Buffett funded an initiative to protect the African cheetah, but encountered the kinds of “cultural disconnects” that are fatal to any charitable endeavor. Culturally, Africa has a different approach to planning, time management, scheduling, or implementing. Understanding this social reality helped Buffett see that food-insecurity projects must involve local actors from the inception and must acquaint them with new ways of working toward long and short-term goals.

Thailand: Howard G. Buffett’s son, Howard W. Buffett, visited Thailand after the 2004 tsunami. He found that some relief efforts were under substandard management. NGOs and other organizations competed for the fastest, most visible results, and some funds went into advertising their efforts instead of assisting tsunami victims.

In his global search for initiatives worth funding, Howard G. Buffett discovered efforts against food insecurity that are close to achieving effectiveness. For example, the number of elephants in northern Botswana has grown so dramatically that today there is one elephant for every person there. The two populations vie “for basic resources.” There are complex and expensive methods for reducing elephant-caused damage. However, the traditional “migration tool” of burning “chili-pepper soaked cloths” on the edges of the fields repels elephants because the chemical in the chilies stings their trunks.

Some programs in the US should be tweaked or dropped altogether. “We should end nearly eight decades of subsidizing crop production and instead figure out how to subsidize and incentivize highly productive farming practices that conserve natural resources – namely, soil and water.” Washington should instead support farming that protects “natural resources – soil and water.” The government should work to encourage farmers to practice “soil-sustaining” methods before it becomes necessary to mandate them.

“Living is not the same as thriving and…achieving food security is never a quick fix.”

In Afghanistan, as a member of a governmental team working to rebuild the war-torn country’s farming sector, Howard W. Buffett learned that local farmers need to rely on a “value chain” – and “agricultural ecosystem” that promotes economic collaboration and helps ensure that harvests reach the marketplace. Without a reliable value chain, farmers become discouraged from planting nourishing crops and turn to the easy money of “the poppy trade.” The Buffett team learned that consulting with “shuras, or village councils” was a much more effective way to create the infrastructure that supports a revived agricultural sector.

“Wherever people are starving and fear for their future, terrorists and fanatics will use food to lure some to the darkest corners of human existence. Food is power.”

Calling himself a “pessimistic optimist,” Buffett has found that the following efforts give him encouragement for the future of food security:

Brazil: The Brazilian government opened the “tropical savannah” – known as the “cerrado” – to agriculture that uses “no-till practices” to encourage soil conservation and focusing on soybean production. Formerly, 11% of Brazilians qualified as malnourished; now only 6% do. Brazil may serve as a model for small farmers on Africa’s savannahs.

Central America: The World Food Program’s Purchase for Progress initiative buys local food for food-insecure populations and ensures that local growers can transport their harvests to market. Buffett’s foundation builds on this effort by teaching farmers the necessary business skills.

Democratic Republic of Congo: Theo Chocolate, a Seattle candy company, practices “enlightened capitalism” by buying cocoa from smallholder farmers in Congo. It is “putting in place the training and value chain connections that have a chance to pull many people out of extreme poverty.”

Ghana: Farmers now are learning why they should forgo slash and burn tactics for conservation farming. Buffett’s foundation supports programs that teach farmers how to use no-till methods to produce bigger yields more efficiently.

Nicaragua: The Agriculture for Nutrition program teaches small-scale growers how to gain ownership of the land they work and helps them develop the market expertise they need.