Are you a professional doormat? Do people constantly push you around to get you to help them? If so, what can you do? 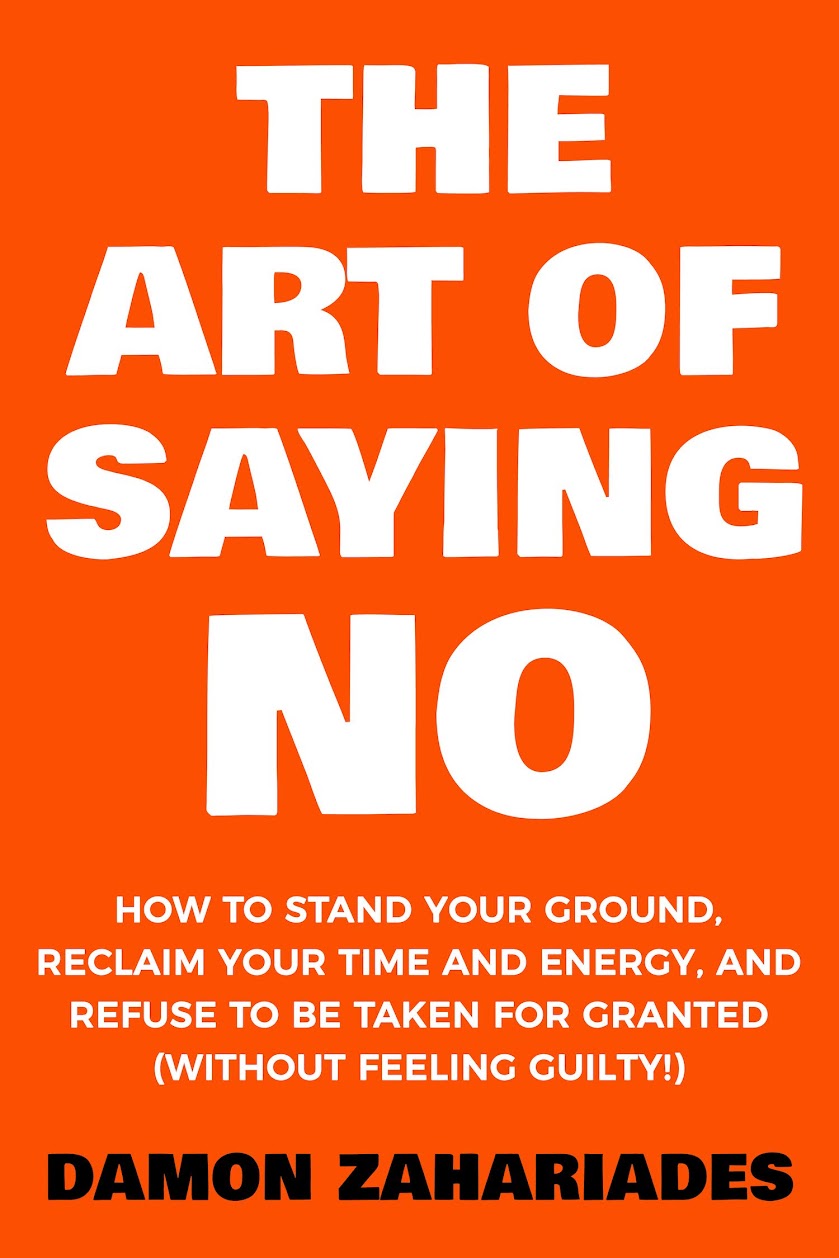 Turn to author Damon Zahariades, whose best-selling instruction manual gives you useful techniques for saying no. A self-described “recovering people pleaser,” Zahariades applies his real-world experience to this universal issue. He used to turn himself inside out, he maintains, to help his friends, family members and colleagues with any requests for assistance. Although he always offered his valuable time with a big smile, inside he would be miserable and feel like a sap.

Here, Zahariades teaches you how to avoid making the same self-sabotaging mistakes by mastering the art of saying no graciously. He promises that the more often you say no now, the less often you’ll need to say it in the future.

Are you a professional doormat? Do people constantly push you around to get you to help them? If so, author Damon Zahariades’ best-selling instruction manual gives you useful techniques for saying no. Zahariades explains why you should speak honestly and directly about what you want to do and don’t want to do. This includes saying no when appropriate. He promises that the more often you say no now, the less often you’ll need to say it in the future.

Here’s a common dilemma: A friend asks you for help, and you comply. The 10 to 15 minutes of your time that your friend requested turns out to be closer to an hour. You feel good about helping, but you also feel bad: You could have used that time on important work that needed completing. Now, you’re further behind. And you might feel like a chump.

“Saying no to people is one of the most important skills you can develop. It frees you to pursue your own interests, both personal and professional.”

Soon afterward, another friend makes a similar request and, being “nice,” you lose another hour away from your work. Now, you’re even further behind. Unfortunately, this often becomes a pattern. In an effort to be kind, you assume the put-upon role of the go-to person who always does favors for others. As a result, you may end up resenting the people who ask you for a hand. And you may be angry at yourself for giving up time you needed for yourself. Here’s a simple truth: Every time you say yes to someone else, you say no to yourself. Fortunately, there’s a productive way to get out of this predicament: Learn how to say no with poise, grace and tact – and without guilt.

If you don’t guard your time and your priorities, no one else will. Take care of your own business before you take care of anyone else’s. Failure to do so is self-defeating. If you spend most of your time helping others and not attending to your own needs, you will become tired, cranky and dejected. Then you won’t be able to help anyone, including yourself. The basic rule of self-preservation is to take care of yourself first. Once you do, then you can help others within reason and never to your detriment, at least not without thinking it through.

Taking care of yourself first requires assertiveness, which demands developing self-confidence and self-esteem. You must be able to express what you want from life and then go get it. You must speak up for yourself when necessary and do as you think best. When you are assertive, you feel free to live as you wish without needing other people’s endorsements.

“Saying yes is an ingrained habit for many of us. It’s something we learn to do over a long period of time. The longer we do it, the more entrenched the habit becomes until it’s instinctive.”

Assertiveness calls for forthright communication. As you learn to say no, you become more assertive. “No” will become a magic word that can change your life for the good. Assertive people aren’t aggressive. Being assertive means speaking your mind, not unpleasantly, but without fear of consequences. Being aggressive means you are belligerent, hostile, opinionated and threatening. Assertive people are respectful and never talk over others. Aggressive people feel as if they must dominate meetings from start to finish. They act as if they’re the only people in the room with good ideas. In group settings, they try to outtalk everyone else. Assertive people are considerate, but they don’t allow themselves to be pushed around.

The Power of No

“No” is a little word that carries tremendous power. This is one reason many people hate to say – or are afraid to say – no. When they do summon the courage to turn someone down, they often offer apologies and excuses. They practically beg forgiveness.

“It’s unsurprising that we often say yes when we know we should say no. It’s an instinctive response born of our longing for other people’s approval.”

Most children learn to be nice to others as the basis of their value systems. They want others to see them as helpful and caring; they demonstrate goodness by being nice. Saying yes becomes an important quality in this approach to life. When these kids become adults, many of them become virtual yes machines – saying yes to everyone about everything.

“The best way to help people over the long run is to ensure your needs are met first.”

Some individuals become inveterate people pleasers. You’re a people pleaser if you’re afraid to speak up, feel you must always put on a happy face, act chipper when you’re down, avoid conflict, see yourself as selfish when you do anything for yourself, have weak “personal boundaries” and believe that only other people’s happiness matters. People pleasers can’t take rejection; the idea of saying no fills them with dread.

The tendency to say yes often becomes second nature or a strong habit, making it a learned behavior. When someone asks you for a favor, you don’t even think about the request, but instead automatically and instantaneously agree. You can unlearn this learned behavior. Start small. Instead of immediately acquiescing to a request, purposely pause for a few seconds and consider what the other person is asking you to do. This pause lets you short-circuit your knee-jerk habit of saying yes. Next, think about what prompts you to want to say yes to a particular request: validation? Approval? Low self-esteem? Realize that saying yes all the time is a habit you must work hard to break.

Why You Can’t Say No

People have trouble saying no for numerous reasons:

Reflect on how always saying yes might affect you negatively. Use these strategies to break your yes habit:

When you always consent to put others’ needs ahead of your own – five minutes here, an hour there, two hours somewhere else – you throw away your most limited commodity: your precious time. Once you give away your time, you’ll never get it back. Those five minutes often turn into 45 minutes, and those two hours often turn into most of the day. If you’re the kind of person who will help out one or two people by donating your time, you probably also lend a hand to numerous other people on a regular basis. You may end up spending a good deal of your productive hours helping other people meet their goals and never meeting your own.

“Self-care isn’t selfish. It’s necessary. The problem is [that] if you’re constantly saying yes to other people, putting their priorities ahead of your own, you won’t have the time or energy to care for yourself.”

This is a recipe for personal disaster. You need a different way to operate “to turn down requests, invitations, favors…without feeling guilty.” Knowing how to say no gracefully and actually doing it are two different things. The first few times you stand up for yourself won’t easy. But over time and with regular practice, saying no with confidence and without excuses will get much easier.

“If you don’t prioritize your life, someone else will.” (essentialism advocate Greg McKeown)

To become an expert at saying no, start out with little refusals and work your way up to big ones. For example, tell the server at a restaurant, “No, I don’t want dessert, thanks.” Once you’re comfortable with the little noes, move to medium-size noes and eventually to big noes. As you do, you’ll notice a new dynamic when you’re interacting with your friends and associates: They’ll stop bothering you with their constant requests for your time. As you become better at saying no, you’ll have to say it much less often.

Productivity expert Damon Zahariades is owner of ArtOfProductivity.com, a site devoted to showing you how to hack your day to get more things done.

He wasn’t always productive. Damon spent many years in Corporate America, dragging himself to ridiculous meetings and enduring the impromptu “drive-by” visits of his coworkers, before striking out on his own. Today, he owns his own content marketing agency and creates action guides that show others how to boost their productivity.

Some personal likes and dislikes:

Join Damon at his blog at http://www.ArtOfProductivity.com and sign up for his ongoing series of productivity hacks via email.

Your Free Gift
Notable Quotables About Saying No

Part I: The People-Pleasing Habit

Part II: Reasons We Struggle To Say No

Part III: 10 Strategies For Saying No (Without Feeling Like A Jerk)

Stop Being A People Pleaser! Learn How To Set Boundaries And Say NO – Without Feeling Guilty!

Are you fed up with people taking advantage of you? Are you tired of coworkers, friends, and family members demanding your time and expecting you to give it to them?

If so, THE ART OF SAYING NO is for you.

Imagine being able to turn down requests and decline invitations with confidence and poise. Imagine saying no to people asking you for favors, and inspiring their respect in the process.

Amazon bestselling author, Damon Zahariades, provides a step-by-step, strategic guide for setting boundaries and developing the assertiveness you need to maintain them. You’ll learn how to say no in every situation, at home and in the workplace, according to your convictions. And best of all, you’ll discover how to get your friends, family members, bosses, coworkers, and neighbors to respect your boundaries and recognize your personal authority.

In THE ART OF SAYING NO, you’ll discover:

PLUS, BONUS MATERIAL: dedicated sections on saying no to your spouse, kids, friends, neighbors, coworkers, clients, bosses, and even strangers!

If you’re sick and tired of being taken for granted, grab your copy of THE ART OF SAYING NO today! Start taking control of your life by learning how to say that simple, beautiful word: “No.”

I realized that as long as I was respectful to the individual asking for my help, I wasn’t responsible for any offense taken when I said no.

Saying no to people is one of the most important skills you can develop.

The most responsible thing you can do is care for yourself before you cater to others.