As people return to the office, the potential for workplace conflicts will likely increase.

Whether you are a peace-loving teammate or a leader planning a smooth transition to the physical workplace, this week’s reading recommendation offers hands-on advice on preventing and resolving workplace clashes. 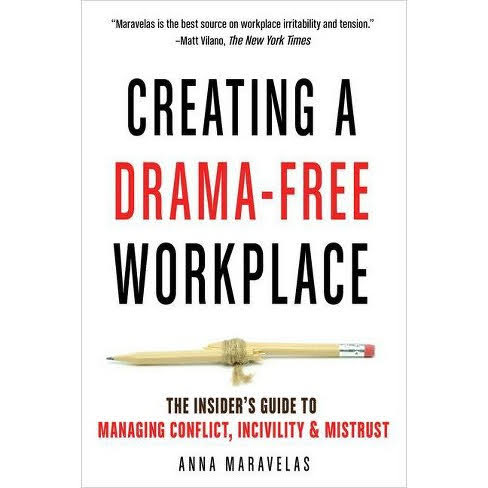 Avoiding drama in the workplace boosts your performance and your health.

Recommendation
Summary
Take-Aways
Workplace conflicts unfold in three different kinds of corporate cultures: “hostile,” “indifferent” and “connected.”
Your attitude toward frustration determines how well you respond to conflict.
Five factors, including poorly designed systems and processes, cause most workplace conflicts.
People won’t change unless they experience acceptance.
Nelson Mandela, former president of South Africa, chose to improve the system rather than seek revenge.
Avoiding workplace drama has many benefits.
Seek understanding. Don’t blame others. Act wisely.
About the Author

Workplace conflict consultant Anna Maravelas draws on her long experience to explain how to prevent and resolve workplace clashes. She illustrates her suggestions with short case studies which make the book instructive and entertaining. She also enlivens the reading experience for senior managers and HR professions by adding insights from various other disciplines. Managers can put her practical advice to work right away.

Your overall corporate culture determines how conflicts emerge and how best to resolve them.

“The behaviors that destroy trust and connectedness are found in every workplace.” ”

Your attitude toward frustration determines how well you respond to conflict.

When you encounter a conflict or problem, the situation will trigger one of three possible “assumptions”:

Five factors, including poorly designed systems and processes, cause most workplace conflicts.

Discord in a workplace often results from one of these five circumstances:

How can you deal with other people’s angry or inappropriate behavior? You don’t have to turn a blind eye to bad behavior, but you can recognize that everyone, yourself included, sometimes acts badly. By acknowledging this fact, you will see that you don’t gain anything by feeling upset over other people’s behavior.

“Authentic warmth wrapped in the belief that we can do better is inspirational.”

Holding others accountable for destructive behavior is important, but the way you accomplish this goal matters immensely. When you act assertively, you can combine that attitude with either anger or warmth in four ways:

When someone tells you an amusing story about someone they find insufferable, guide the storyteller to see that this person may lack workplace skills or social ability and may deserve pity instead of disdain.

Nelson Mandela, former president of South Africa, chose to improve the system rather than seek revenge.

When you wonder whether you should blame another person or hold him or her responsible for a problem, consider South Africa’s Nelson Mandela. When he became the leader of his country, he had ample reason to deal severely with his opponents. He chose not to do so because that was the better course of action for the future of South Africa.

From 1948 to 1990, the Afrikaner government – Mandela’s opponents – viciously mistreated Black South Africans. Once he was in a position of power, Mandela could have repaid them in the same coin, but he recognized that such a course wouldn’t heal the nation or bring about a healthy society. Instead, he focused on improving the system instead of blaming individuals.

“The people with whom you interact trust you because you open the dialogue with respect and are willing to learn about their world.”

Working with Archbishop Desmond Tutu and the previous president of South Africa, F.W. de Klerk, Mandela led the country through a process of “truth and reconciliation.” His strategy allowed people to admit that they committed political crimes and receive amnesty in return. If someone needed to accept responsibility and refused, the government could prosecute them. The truth and reconciliation process elicited painful testimony from both sides. It helped prevent many court cases that would have taken years to resolve.

Avoiding workplace drama has many benefits.

You and your company can benefit in many ways if you can avoid or resolve workplace conflicts without dramatic flare-ups:

Most people encounter around 30 frustrating situations every day. In such circumstances, the assumptions you make – to blame others, blame yourself or look for the reason – shape your results and outcomes, for better or for worse.

“Organizations that are deeply engaged in building and maintaining cultures of appreciation seem to do so effortlessly.”

Consider the impact of your behavior patterns throughout your life. If you stop to think about the situations you encounter rather than just reacting to them, you can build an internal attitude of warmth and inquisitiveness. Your colleagues will take you into their confidence because you never criticize other people; instead, you pause to figure them out.

Explore systemic issues such as the challenges governments face, why hospitals lack sufficient staff, why civic officials can’t maintain the highways or why your neighbor acts so weird. Try to gain an understanding of the covert factors at play in your workplace. These insights will allow you to select personal approaches and corporate practices that will make your organization more effective and peaceful.

Anna Maravelas is the president of Thera Rising International. She teaches conflict resolution and her work has appeared in publications such as Oprah Magazine and Harvard Management Update.