Modern-day retail is going through a massive shift.

Advancements in technology — especially on mobile — are changing how we shop. For eCommerce and retail companies, the only way to engage customers, in the long run, is by creating intuitive, flawless, and enjoyable mobile shopping experiences that go beyond a single purchase. ‍ In this article, we’ll dive into the latest trends in mobile shopping, and explore the cutting-edge features and mobile engineering practices used by the world’s leading shopping apps. ‍ What you’ll learn:

Modern-day retail is going through a massive shift and, as a result, the eCommerce industry is booming. Advancements in technology — especially on mobile — are changing how we shop. Today, more than ever, we have the option to not only virtually browse a shop’s full range of products but mimic aspects of the in-store experience — such as trying on clothes — using augmented reality. Or even enhance them — by allowing customers to place items of furniture in the home, for example.

It does not come as a surprise that by now, 79% of digital minutes in the US are spent on mobile and 88% of that time is spent in mobile apps.

To keep up with changing consumer behavior, retailers have to embrace digital technologies. For eCommerce companies, the only way to engage customers, in the long run, is by creating intuitive, flawless, and enjoyable mobile shopping experiences that go beyond a single purchase.

In this article, we will dive into the latest trends of the eCommerce scene, focusing on mobile shopping. We explain why the retail industry has been going through a digital transformation, and provide valuable product and engineering insights gathered from some of the world’s top shopping apps.

To bring you this report, our researchers analyzed the shopping app category — with data provided byApptopia — in the iOS US App Store. For our analysis, the top apps analyzed were based on App Store category rank, with download figures from the last 30 days (7th August 2021 – 6th September 2021).

Other facts and figures are based on a broad range of reports and studies, and sources are provided throughout.

Record growth in the past two years

When it comes to business expansion and revenue, the eCommerce industry has experienced unprecedented growth in the past two years: 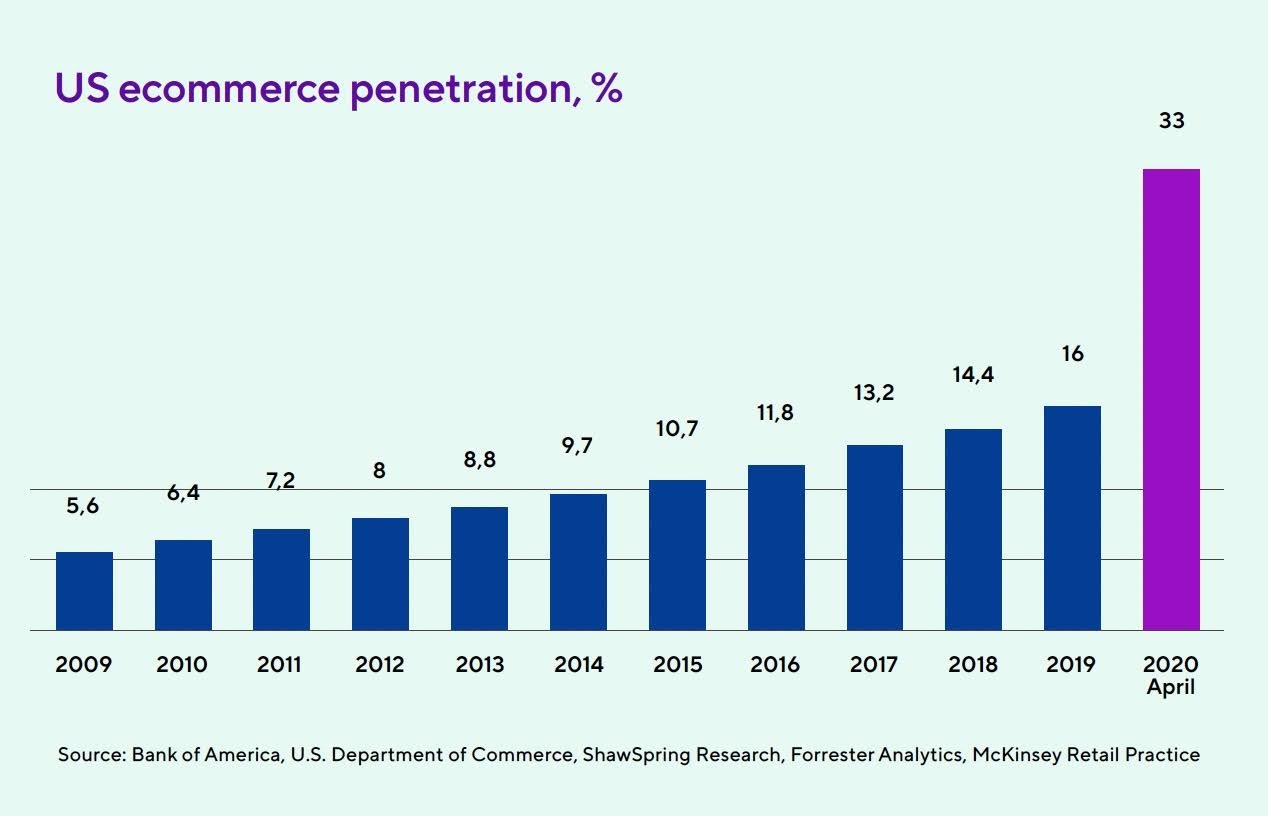 For years, mobile has been a key player in online purchases but it’s become especially prominent since Covid-19: new consumer needs for contactless ways of shopping has drastically increased due to lockdowns around the world, further strengthening the importance of mobile. The future of mobile commerce is bright:

As a result of this shift, the status of department stores has become less secure: malls experienced declining traffic even before COVID-19, but lockdowns and stay-at-home orders represent an unprecedented threat to traditional retail.

In the past 18 months, several iconic US-based retail giants filed for bankruptcy, such as:

On the other hand, there are several types of companies profiting from changing tendencies in customer behavior, such as:

Shopping on mobile can happen in two ways: either on mobile websites or in mobile apps. When it comes to converting users, mobile apps are a powerful driver. According to a report, App advantages over mobile browsers, smartphone users spend 7x more time in native apps than in browsers and they purchase more frequently within the apps, as well.

Why do apps perform better?

In short: investing in an app pays off

The state of mobile engineering in shopping

The top 10 iOS shopping apps in the US

Release cadence — or how often a new version of an app is released to the App Store — says a lot about a team’s Mobile DevOps maturity.

Looking at the top 10 shopping apps in the US, we see that the average release cadence is 9.8 days. The quickest is Walmart, with an incredible 5 days between releases, while the longest is Amazon, with a comparatively plodding 15 days.

And the further down the charts you go, the longer the average release cadence becomes: for the top 91-100 shopping apps, as a comparison, the average is 30.8 days if we’re including Hobby Lobby, which updates their app every five months on average. Exclude Hobby Lobby, and we find a 17.6-day average — still relatively quick, but almost half as quick as the top 10 and a long way from ideal.

While this data doesn’t tell us that more releases cause higher rankings, it does mean that the more successful an app, the more likely it is the team behind it has adopted a quick-release cadence.

The notable tech of the top 10 shopping apps

Of the three cross-platform frameworks evident, React Native is the most popular (40%), followed by Cordova and Flutter, both used by one app each.

70% of the top 10 use Apple’s UI framework, Swift UI, showing that it’s being widely adopted.

Augmented reality (AR), a key technology that we’ll be discussing later, is being utilized by 50% of the top 10 — with the two notable expectations being SHEIN and Adidas CONFIRMED. Adidas, however, does use AR on their main app.

Nike is unique in implementing two Chinese payment providers: WeChat Pay and AliPay. While not the only app in this list to be available in China, Nike has by far the largest Chinese audience, with 3.93M downloads in China this year-to-date (second only to the US with 6.465M downloads), and is the 24th most popular iOS shopping app in China.

Of the top 10 iOS shopping apps in China, 9/10 use either WeChat Pay or AliPay so if you want an app to be a success in a particular market: implement local payment providers.

Gone are the days when users only used virtual assistants (VAs), like Siri and Alexa, to set a cooking timer. A survey of 1,081 Americans from CouponFollow found that 60.3% used VAs at least a few times per week and 39.1% were “very likely” to shop using a virtual assistant.

Asos, as always ahead on digital trends, launched their assistant (or “fashion bot”) Enki back in 2018 to help shoppers find new styles and (crucially) shortlist or purchase items recommended.

Which features and commands should be prioritized? According to the survey, these were the top five commands:

Poor checkouts are traditionally where a significant amount of friction is to be found in eCommerce (one study showed that the average shopping cart abandonment rate for eCommerce sites is 65.23%) and this is just as true for mobile. The key is to make it quick and simple. And if users are already on their phones, why not integrate with their phone’s built-in payment system?

Using Apple Pay and Google Pay also allows you to create a richer omnichannel experience through integrating digital wallets for loyalty or reward cards, for example.

According to Statista, in September 2020 there were 507 million Apple Pay users worldwide, a 15% increase over the previous year

7 of the top 10 iOS shopping apps in the US have already integrated the Apple PassKitWallet SDKs. – Source: Apptopia SDK data, September 2021

Comscore’s Emerging Digital Payments Advisor found that 60% of smartphone purchases in 2020 were via mobile apps.
Source: 2020 Global State of Mobile

When it comes to augmented reality, few industries benefit more than those where styling is involved.

For example, brands like IKEA are making use of LiDAR technology in the latest Apple devices to bring unprecedented levels of accuracy when it comes to placing objects in the home.

This year alone, IKEA Place has been downloaded 437.41K times across iOS and Android worldwide.

Get inspired — here are four fantastic examples for seeing how to effectively implement shopping AR:

The importance of performance and processes in an unforgiving space

In eCommerce, every lost user is lost revenue. According to Google, 52% of users said a “bad mobile experience made them less likely to engage with a company.”

In a sector where users can be fickle, and where a shop needs to be able to cope with the ebbs and flows of demand, preventative measures need to be taken.

In this section, we will introduce three key topics in preventing lost revenue:

The need for speed

A lengthy load time on a mobile device is just as inconvenient as waiting in line at a store. We love using our phones because they are fast. If a user has to wait around for your mobile app to load or process their payment they’ll most likely leave the app without making the purchase.

29% of smartphone users will immediately switch to another site or app if it doesn’t satisfy their needs (e.g. they can’t find information or it’s too slow). – Source: Consumers in the Micro-movement,Wave 3, Google /Ipsos, U.S. August 2015, n=1291 online smartphone users 18+

Not only does having a performant app prevent users from leaving, but Google’s Play Store will also downrank apps that load more slowly and feature more bugs. While Apple hasn’t explicitly stated the same, we know that poor UX results in poor reviews, and reviews are a key indicator for both Apple and Google.

What should you be looking for when it comes to improving app performance? Gergely Orosz, in his e-book “Building Mobile Apps at Scale” (download the free Bitrise version), refers to the following bottlenecks:

Code freezes and their role in preventing lost revenue

What’s a code freeze?
The end-of-year shopping period puts enormous pressure on product teams and developers. For this reason, many teams decide to implement a code freeze shortly before the season begins. This means that to ensure 100% uptime and avoid unexpected bugs and crashes resulting in a potential loss of revenue, they stop releasing code to production, usually until the end of the holiday season.

Are code freezes necessary?
Even though they are often scrutinized, holiday code freezes are still popular in mobile shopping app development — both on iOS and Android — in an attempt to minimize potential risks and ensure app stability during this high-traffic period. These days, however, high-performing, agile teams are finding new ways to tackle the increased traffic during the shopping season, without having to stop releases for several weeks. According to a recent report, Peak Traffic 2020, companies that are less than 2 years old — hence, more tech-forward — were the least likely to implement a code freeze (50%), as opposed to almost all (92%) companies older than 25 years. This can be explained by young companies’ willingness to adopt a combination of agile mindsets, methodologies, and modern toolsets.

The pros and cons of the code freeze

Many factors determine whether a code freeze is right for your team. Here are some of the main things you should consider before you make your decision:

How to prevent and recover from bad releases

When it comes to preventing lost revenue, code freezing is just one option. Here are some of the best practices to prevent bad releases from happening in the first place and to quickly recover when they do:

Prevention
The state of mobile shopping apps 24/27 The first step to reducing the impact of bad releases is to prevent them from occurring altogether. The following practices enable teams to release with confidence:

Recovery
You have a speedy app that is stable and free of bugs. You test, test, and test some more. But the worst inevitably happens: you release a bad version of the app to the stores. Here are the essentials of recovery: