McKinsey colleagues Chris Bradley, Martin Hirt, and Sven Smit challenge strategic planning’s conventional wisdom by pointing out that it hasn’t worked in 50 years. They urge leaders to acknowledge the social and emotional dynamics at play in any strategy session – egos, status, risk aversion, and the like – and remove these biases. 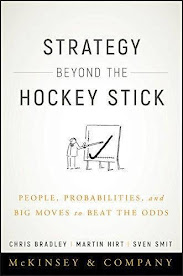 Strategy Beyond the Hockey Stick – People, Probabilities, and Big Moves to Beat the Odds

Replace them with a process that you base on data, facts and an outside-the-firm perspective to calculate which opportunities offer the highest probabilities of success. Then, say the authors, bet big.

Take-Aways
Summary
About the Authors

Most firms still fail at articulating strategy beyond what they’ve done in the past.
Egos, groupthink, confirmation bias and risk avoidance undermine bold visions and big ideas. Add to that the tendency of most CEOs to distribute resources uniformly across divisions and business lines and this year’s strategy often looks a lot like last year’s.

“For most businesses, the best predictor of next year’s budget is still this year’s budget, plus or minus a few percent.”

Business unit leaders develop slide decks to wear down corporate budget resistance and gain approval for their plans. But, their future projections resemble a hockey stick. They promise that if the firm invests in losses this year and next, then they’ll see rocket-ship-rising gains.

Based on millions of years of human evolution, natural biases favor fast action over the deep thought and consideration that strategic planning needs.
Dozens of biases affect people’s thinking, especially in groups. As a result, business line leaders set low goals they know they can achieve. They focus on maximizing gains for themselves and their teams rather than for the organization. Firms evaluate performance without gauging the difficulty of initial goals, and thus they offer managers no incentive for making big bets.

“Today’s strategic challenges are very similar to what they’ve been over the ages, despite the serious efforts of a lot of smart people.”

The urge to protect a business line – especially one that generates large, steady profits – deludes the savviest leaders, as it did at Kodak, where executives famously rejected the digital photography innovations that its engineers invented years before their competition did. Kodak’s leaders thought digital cameras would cannibalize their lucrative film business. They couldn’t see that digital photography would destroy the film business entirely. To overcome such biases, listen to outside ideas and relentlessly pursue them.

Economic profit – what you have left after subtracting the total cost of capital – offers a good measure of success that forces you to look outward.
In plotting the economic profit of the world’s largest firms, you can discern a “Power Curve” – which has a short, steep, negative tail at the left (bottom quartile), a long, flat line in the middle (two average quartiles), and a short, steep, positive line at the right (top quartile).

The majority of firms produce little economic profit. What’s leftover after all expenses – normally known as “profit” – represents investors’ minimum expectations in return for letting the firm use their money. These companies, despite their efforts, just “pay the rent.”

At the far right of the Power Curve, some firms produce a markedly better-than-average economic profit. The top 25% turn an average of $1.4 billion each year. Investors love these firms, and don’t care what industry they’re in or where they reside. This makes the world and every firm in it your potential competition.

Getting to the upper quartile in economic profits requires bold action, not just optimistic forecasts.
Hockey-stick-shaped plans rarely attract big resources, so even solid firms suffer. Companies invest heavily in sure things, like laying fiber-optic cable during the first internet boom or rushing into personal computers when consumers were starting to buy them en masse. Looking outward with a longer view to see how much-unused fiber capacity already existed or how many other firms were rushing into PC manufacturing could have resulted in better decisions.

“More than 70% of executives…surveyed say they don’t like their strategy process, and 70% of board members don’t trust the results.”

Firms overrate themselves against their competitors or believe in business-book formulas for becoming the next Apple. They ignore market conditions. They often settle on one idea quickly – usually an optimistic idea that has not withstood rigorous assessment – and push it through. Most firms prefer small, iterative steps toward growth that feature an even allocation of budget across projects and business lines.

Hockey stick-like growth happens in firms that correctly identify the key components of the enterprise and invest in those business lines or divisions that lift the entire ship. Aircraft parts manufacturer PCC, for example, invested in its aerospace and defense divisions from 2000 to 2004. In comparison with firms on the same mid-range spot on the Power Curve, PCC took a calculated gamble about where to focus its efforts – and achieved great results.

Increase your odds of making the right decisions by thinking in terms of probabilities.
Most leaders cite strategy bestsellers like In Search of Excellence and Good to Great. But these and virtually every other strategy book offer no hypotheses you can validate – just limited case examples of successful firms from the past. Think through probabilities that you base on your firm’s attributes. Track and analyze 10 variables to assess your odds of success. These variables fall into three categories:

To improve your odds of entering the top quartile, strive to maximize results as much as possible across each dimension. When PCC launched its strategy for growth, it was in the low-average quartile in terms of size, debt, and R&D investment, and was in underperforming markets. But it enjoyed strong productivity and excellent differentiation, so it pulled hard on those levers.

“It is nearly impossible to make big moves if resources are peanut buttered across all businesses and operations.”

In the category of Moves, PCC invested heavily in three of its divisions and made a series of strategic acquisitions and divestitures. Between 2005 and 2014, it outperformed the S&P by 20% and entered the top quartile of the Power Curve from the middle – a feat that only 8% of firms managed.

Knowing where you stand helps you leverage your strengths and determine where to improve.
Assessing a firm’s positions across the 10 dimensions enables you to predict how likely it is to move to the right of the Power Curve. Endowment plus Trends constitutes 55% of the equation – Moves make up the rest.

You can’t easily change your Endowment, so study trends. Consider trends to help you make better decisions about which business lines to double down on, what regions to operate in, and what acquisitions and/or divestitures to pursue. If you can put yourself into high-growth industries and markets, you will benefit.

Examining trends and segments also help you identify specific opportunities. In the early to mid-1990s, most newspapers didn’t fear the online threat to their cash cow – classified advertising. Few took bold action. The media company Schibsted, in Norway, was an exception. It offered free online classified ads. Schibsted thrived and grew throughout Europe.

Most incumbents fail to act on disruptive trends in time to avert disaster.
Disruption doesn’t occur all at once. A disruptive new model might be hard to see. When it reaches the validation stage, incumbents take notice even though the disrupter does not yet pose a threat. Revenues under the incumbent’s model remain strong. At this stage, no one knows which disruptions will stick. Here, bold moves save companies. When households were beginning to enjoy bandwidth that could accommodate quality video streaming, Netflix shifted from an emphasis on mailing CDs of movies to streaming them. Its shares dropped 80%, but Netflix bounced back and thrived.

Rather than respond aggressively to disruption, as Netflix did, most firms dabble in the new model. Daily pressures and the comfort that current revenue streams deliver interfere with good decisions. By the time a new model moves up the curve to mass adoption, firms that didn’t move aggressively find they’re too late. The new model displaces the old. Incumbents then must bet everything on the new model.

The moves you make an account for almost half of your odds of success. Make big moves.
Only big, bold moves get you to the top quartile in economic profit. Make even bigger moves if you start with a poor endowment. Betting big runs counter to human nature, especially for incumbents with a lot to lose. One or two big moves increase your odds of moving up the Power Curve from 8% to 17%. Three big moves improve your odds to 47%.

“Big moves sound scary, but they are actually the safest bet. They are best done by purposefully making a series of smaller steps over time.”

In 2000, Corning assessed its 10 dimensions to estimate the probability of moving from the bottom quartile of the Power Curve to the middle (78%), and then to the top (49%). Over the next 10 years, it made a big effort in each of the five Moves dimensions:

Chris Bradley, Martin Hirt, and Sven Smit work together in McKinsey’s Strategy Practice. Smit resides in the Netherlands, Hirt in China and Bradley in Australia.