Nobel laureate George A. Akerlof and prescient Yale economics professor Robert J. Shiller explain the role of human psychology in markets. They say conventional economic theory assigns too much weight to the role of reason in economic decision making, and too little to the role of irrational emotional and psychological factors. That insight would have been novel a few years back, but numerous other authors have made the same point, though few with such sterling credentials. Having asserted their beliefs and offered evidence about the power of emotions, or “animal spirits,” the authors prescribe curative policies, though they don’t always illuminate their proposals’ full real-world impact. Akerlof’s and Shiller’s distinguished reputations command attention, and we confirm that their book is worthwhile reading. Yet, those who know the authors’ bodies of work may wish for even more insight. 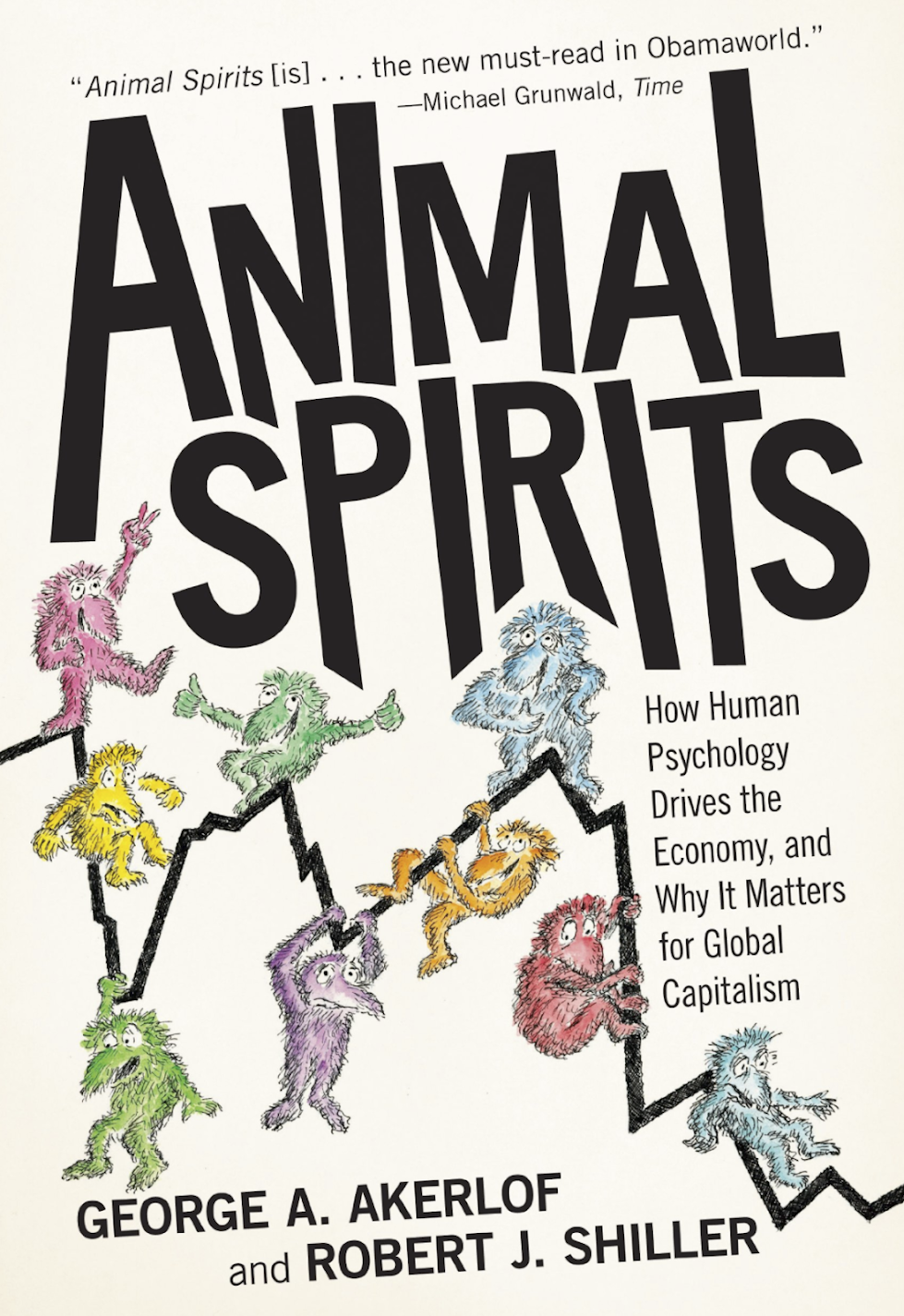 Animal Spirits – How Human Psychology Drives the Economy, and Why It Matters for Global Capitalism by George A. Akerlof and Robert J. Shiller

Take-Aways
Summary
Emotional Economics
Animal Spirits: Confidence and Fairness
The Dark Side
“Money Illusion”
The Impact of Stories
Explaining a Depression
The Power of Central Banks
Today’s Woes
Why a Job Can Be Hard to Find
The Saving Problem
Why the Market Seems Crazy
Real Estate Cycles
Why Aren’t African-Americans Better Off?
About the Authors

Economic performance is largely mental, though not necessarily rational. Emotions have a strong presence in economic decision making. Past economists, back to Adam Smith, have almost ignored the role of the irrational in economic decisions. Instead they explained economic events as the result of people pursuing their rational self-interest. That explanation fails to account for massive economic dislocations. It says widespread unemployment should not exist because workers rationally pursuing self-interest would accept lower wages consistent with the value of production. Wages and prices would adjust, the market would stabilize and unemployment would vanish. However, that isn’t what happens.

“People have noneconomic motives. And they are not always rational in pursuit of their economic interests.”

John Maynard Keynes said a rational calculation could not account for such economic decisions as opening a mine or building a factory or constructing an office building. The data about the longterm return on such investments is insufficient to support a truly rational calculation. Keynes wrote that such decisions “can only be taken as a result of animal spirits.”

The word “confidence” turns up often in business literature. Economists emphasize its predictive element: Confidence means an expectation of a bright future, but that is not the only way people use it when discussing money. Common usage emphasizes the word’s implication of trust and belief. Former General Electric CEO Jack Welch once said he had little use for rationally analytical business plans and projections. He said major business decisions come “straight from the gut.” In the economic crisis starting in 2008, an absence of confidence in the popular sense paralyzed credit markets when lenders could not be certain they would be repaid. Lack of confidence can undermine economic policies that might have worked otherwise.

The factors involved in setting wages and salaries in the real world seem very different from those specified in neoclassical economic theory, which tends, for example, to ignore fairness as a crucial factor in financial decisions. Economic experiments show that perceptions about fairness affect what people will pay for items and that human beings will work against their personal, rational economic self-interest to punish those they see as unfair. Fairness seems to influence confidence and cooperation. It also contributes to unemployment – because businesses are unwilling to pay low wages that could be perceived as unfair (even if workers were willing to accept them).

“The crisis was not foreseen, and is still not fully understood…because there have been no principles in conventional economic theories regarding animal spirits.”

Crises ensue when moral hazard undermines confidence. The 1980s savings and loan crisis came about because S&L entrepreneurs made risky investments knowing the government would rescue them. Managers at Enron and other corrupt firms exploited sly accounting practices and public gullibility to misrepresent their performance. Similar practices regarding subprime mortgages and other arcane investment instruments also led to a recession. Mortgagers made loans to people who could not repay them, but the lenders did not care since they sold the loans. During securitization, rating, and sales, participants served their self-interest by downplaying real risks. All of these instances resulted in the kind of erosion of confidence that can deepen recessions.

Irrational money illusion is an aspect of animal spirits. In his 1928 book, The Money Illusion, Irving Fisher gave an example of a woman whose illusion was that her $50,000 bond portfolio was still worth as much as it had been years earlier. Surely, the nominal value was the same, but inflation had eroded its real purchasing power. In the 1960s, economists such as Paul Samuelson, assumed that workers (being subject to money illusion) would bargain for nominal rather than real wages. Milton Friedman disagreed and said workers were not subject to money illusion and did take inflation into account in wage negotiations. Both experts were a bit extreme. Workers do expect salary negotiations to protect them from inflation. Yet, debt covenants, wage contracts, and even corporate financial statements often don’t include inflation adjustments. Plus, people resist wage cuts when prices drop, even at the cost of their jobs. So some money illusion seems to exist.

The Impact of Stories

People live by stories. Literary critics who analyze story patterns find that most of the world’s thousands of stories fit a few simple patterns. These stories are fundamental to the way people think. Some research suggests that the success of strong marriages is attributable to the story a couple of shapes with their relationship. Political leaders may rise and fall based on their ability to inspire followers with stories. Yet, conventional economists ignore stories and even imply that there is something disreputable about basing the economic analysis on stories. Conventional economics seeks demonstrable, quantitative facts. It does not allow for the possibility that the story itself may be a pivotal fact. For instance, stories can inspire confidence. The story of the Internet, a variation of the story of a new era, fueled one of history’s biggest stock market bubbles.

The U.S. has had two severe depressions, in the 1890s and the 1930s. The 1890s depression involved a collapse in confidence, pervasive money illusions that prevented rational responses to falling prices, and stories focused on failure, corruption, and unfairness. Money illusion powered the presidential campaign of William Jennings Bryan, who called for an expansionary, inflationary monetary policy. A run on the banks occurred as people spread stories of financial fragility. The Great Depression featured the same elements. During the ’20s, stories of big market wins drove people to speculate in stocks. After the 1929 crash, stories of unfair or corrupt market manipulation abounded.

The Power of Central Banks

Central bankers have limited power, and the conventional stories of their ability to manage the money supply through open market operations and discount are only half true. The usual view assumes that people carry demand deposits to meet transaction needs. However, this reasoning omits the fact that people can meet their transaction needs in other ways. In an economic crisis, the most important power of a central bank is acting as a lender of last resort. For example, the U.S. Federal Reserve dealt with the imminent failures of Bear Stearns by providing liquidity.

The 2008–2009 economic crisis is quite widespread. Investment banks that seemed sound have failed. Consumers are not buying and cannot get loans. Credit is constricted. This credit crunch exists, in part, because of the rise of a new financial system full of engineered securitizations and derivatives. Until recently, people told stories of rousing innovation about these instruments. Those have changed to stories of corruption and skullduggery. Confidence has fallen; trust is low. Conventional economic models do not address confidence; to rebuild trust, policymakers need a credit target, aside from the conventional monetary and fiscal targets. The credit target should be the amount of credit in the economy at full employment. Monetary and fiscal measures need to be expanded credit to achieve their economic goals. Policymakers work to expand credit three ways:

Why a Job Can Be Hard to Find

The conventional explanation of unemployment doesn’t account for people who want to work but can’t find jobs. It says people could get jobs if they took less pay, just as anyone who wants to sell a house usually can – by lowering the price. In contrast, the efficiency wage theory says employers fear that people hired at lower wages may resent the perceived unfairness of their pay and, thus, undercut productivity. That is, employers pay more than the required – out of fairness. Labor economist John Dunlop found that delivery truck drivers got a wide spectrum of wages, depending on what they delivered. Another study found big wage variations unrelated to education or skill differences.

Savings’ decisions depend on animal spirits. People early in their careers have difficulty imagining what they will want in retirement. Conventional economic theory tells them to balance saving and investment with rational calculations. But how people frame the question about their need to save can shape how much they keep. The “Save More Tomorrow” program, which lets workers commit to saving more of future earnings than of present earnings, increased savings rates.

Why the Market Seems Crazy

The efficient market theory says people make rational decisions about the future performance of stocks based on data, and that prices adjust accordingly. However, the idea that stock prices represent rational responses to information seems untenable. Corporate investors such as Jack Welch discuss the importance of belief, confidence, and “the excitement of creating the future.” They do not speak of equations and projections. Stories of stock prices can feed or launch such confidence and excitement. Animal spirits are hard at work in the markets. Toyota owes its success to Japanese animal spirits, and factors such as stories of identity, confidence, and belonging. The car firm Kaiser Argentina S.A. owes its violent labor strife to Argentine animal spirits, including stories of corruption and exploitation.

Real estate’s undeserved reputation as a great investment depends, in part, on money illusion and on stories that fueled confidence during the recent real estate boom. The 1990s stock market bubble may have made Americans think they were astute investors. When the market collapsed, they moved to real estate. Stories began to circulate about making money buying and flipping real estate. Meanwhile, stories about the importance of homeownership to the progress of minority populations led political leaders to promote what became the subprime lending boom.

Why Aren’t African-Americans Better Off?

Minorities such as African-Americans and Native Americans have a very different story of America than whites do. Whites depict America as a competitive, difficult place where they are individually responsible for their outcomes – because the system is fair. African-Americans, however, tell a story of an unfair, white-run system. Because they see society as unfair, working within it poses psychological challenges. Affirmative action is an important way of dealing with the story of unfairness since it shows that the majority population is trying to make the system fairer, and it gives minorities reason to believe they can achieve real change.

“You pick the time. You pick the country…you will see at play in the macroeconomy the animal spirits that are the subject of this book.”

Conventional economics is useful, but an economic calculus that disregards animal spirits cannot address today’s major economic challenges. The 2008–2009 financial crisis is a crisis of confidence. It involves stories and perceptions of fairness. The story of an efficient market populated by relentlessly rational decision-makers cannot capture that reality.

George A. Akerlof, the winner of the 2001 Nobel Prize in economics, is a professor at the University of California Berkeley. Robert J. Shiller, the best-selling author of Irrational Exuberance and The Subprime Solution, teaches economics at Yale University.