You may not be in a formal leadership position – but that does not mean you cannot have influence over others. Leadership is a mind-set and revealed in your behavior and actions, Allan R. Cohen and David L. Bradford explain in Influence without Authority. The authors outline five leadership practices you can follow to make a difference in any role or situation. 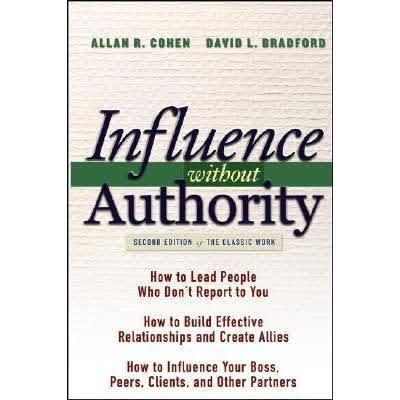 This excellent leadership guide by Allan R. Cohen and David L. Bradford offers a classic, necessary set of prescriptions for anyone working in a flat, team-based organization. That is to say, it is a guide that will prove useful to almost everybody employed at a contemporary organization. The waning of the old hierarchical organization, with its clear lines of authority and control-command management styles, puts a greater emphasis on your individual ability to achieve your goals by enlisting support from people who, often, have no obligation to provide it. getAbstract recommends this clear, jargon-free outline of the basic principles you need to know to influence others, even if you lack sufficient authority.

To work well in contemporary organizations, you need to be able to wield influence. The essence of leadership at any organizational level is to elicit cooperation, since even leaders with authority rarely have enough power to force people to cooperate. Cooperation is a two-way street, and influence is a kind of exchange. To achieve your objectives, you need collaborators. To enlist them, plan ahead so you can help those you seek to influence achieve their own objectives.

“Influence is about trades, exchanging something the other values in return for what you want.”

“When you need something from someone who has no formal obligation to cooperate, begin by assessing whether you could form an alliance by discovering where there might be overlapping interests.”

Critical external barriers to influence include:

“Failure to think in a positive way about people who are difficult to influence is perhaps the deadliest of self-created traps.”

The Currencies of Influence

Influence is a form of exchange, so you must identify the currencies – the valuable resources – you can swap for cooperation from others.

“The trick to unhooking yourself from your negative views is to assume that the potential ally thinks his or her behavior is reasonable, and your job is to understand that reasonable person’s rationale, so that you can pursue a win-win resolution.”

“Everybody’s behavior is reasonable from his or her point of view.”

As well as these positive currencies, you can also use two types of negative currency. If someone fails to cooperate, you can restrict or block their incoming valuable currencies. Or, you can send bad or undesirable currencies their way, such as a chewing out, a bad report to the boss or a rumor that the person is unhelpful. Valuation is one of the most challenging aspects of using currencies of influence. No currency is universal and depends on how the person you want to influence values it. Do not put too low a value on what you offer.

Seeing the World through Another Person’s Eyes

To get a good idea of what your prospective allies value, examine:

“The goal is not to make everybody best friends.”

As you glean an understanding of your potential allies’ contacts, background, education and so on, beware of naïve stereotypes. For instance, not all accountants are risk-averse.

What You Have to Offer

You probably have more currencies to spend than you realize. But to count your currencies, you must first clearly understand your position in the world around you. First, be clear about your major goals. Do you have personal wishes that might prevent you from achieving influence? Be flexible, so you can modify your expectations if necessary. When you’re pursuing an important objective, it is very easy to develop tunnel vision.

“To achieve all the power of which you are capable, you need to understand yourself as well as your potential ally.”

Your influence doesn’t apply only to those at or below your level. To develop a good working partnership, also try to influence your boss and superiors. In fact, whether you have a good or bad boss may be largely up to you. After all, you know better than the boss how well they are managing you. To improve your boss, share information you have that they lack. If they are overworked or overwhelmed, provide moral, personal and political support. Influencing your boss requires tact, but you can use the same influence model that works with your peers. That is, understand the boss’s world as they see it, so you can recognize what currency they value. Then, you will know how to negotiate a diplomatic exchange.

“Sometimes, people with an exciting idea and high commitment become more single-minded than is necessary.”

Sometimes, you may want to influence someone whose relationship with you is already marred by suspicion, hostility and enmity. First, examine yourself to see if the problem is your fault. If you have done something wrong, correct it. Recognize that behavior that seems very reasonable to you may appear very wrong to other people. See yourself through their eyes. Then, examine their organizational context to see why they may have acted in a manner you found offensive or difficult. When you understand the causes of behavior, you may be able to replace your indignation with sympathy and patience.

“Some bosses are too uncomfortable to ever directly discuss their relationship with their subordinates, but there are ways to sneak up on a discussion that have a better chance of working.”

Focus on the job. Relationship issues may remain even after you examine yourself and understand your prospective allies’ context. If so, put your personal feelings aside and get to work on the job at hand. Sometimes focusing on the details of work can eclipse relationship problems, and even help improve or resolve outstanding issues. Working together may one day open a door for talking openly about problems in the relationship.

“The saving grace in organizational life, is that anyone who does it only for selfish ends will sooner or later be seen as more interested in advancing personal goals than at helping the organization accomplish its goals, and will lose credibility and clout.”

The currencies of influence have a time dimension, just as other currencies do. You may:

“The chance to work at tasks that provide a challenge or stretch is one of the most widely valued currencies in modern organizational life.”

Sticky problems arise with time-deferred exchanges. Sometimes colleagues may not even recognize that you have made a deposit in their favor account, or may not be willing to admit that they have a debt to you. Sometimes, people undervalue favors that cost you a great deal of time and effort. In such cases, adapt your responses to the prospective ally’s worldview and the organization’s culture.

“Don’t let one failure lead you to give up. History can be overcome; it just takes repeated efforts.”

The influence model is almost universally applicable. The consistent key to influence is to understand the position and worldview of the person you seek to influence, and to develop a strategy that responds to that person’s values and needs. Influence applies not only on a person-to-person basis, but also on a group-to-group basis. Always understand the context of those you seek to influence. Gather the facts and be alert when they shift. Recognize that in extremely difficult circumstances, you may be forced to use – or to threaten to use – negative currencies, that is, to punish noncooperation. Be willing to use negative currencies when you must; however, begin small and escalate slowly.

Allan R. Cohen is a distinguished professor of global leadership and Director of Corporate Entrepreneurship at Babson College. David L. Bradford is a senior lecturer on organizational behavior at the Stanford University Graduate School of Business and Director of Stanford’s Executive Program in Leadership. They are the co-authors of Managing for Excellence and Power Up.