In this international bestseller, author, clinical psychologist and University of Toronto psychology professor Jordan B. Peterson draws on religion, philosophy, neuroscience and anthropology to formulate “12 Rules for Life: An Antidote to Chaos” for living a meaningful life. His rules seem familiar because many derive from Christian ethics – which, Peterson says, inform Western culture – most notably the duty to accept suffering and to alleviate it. 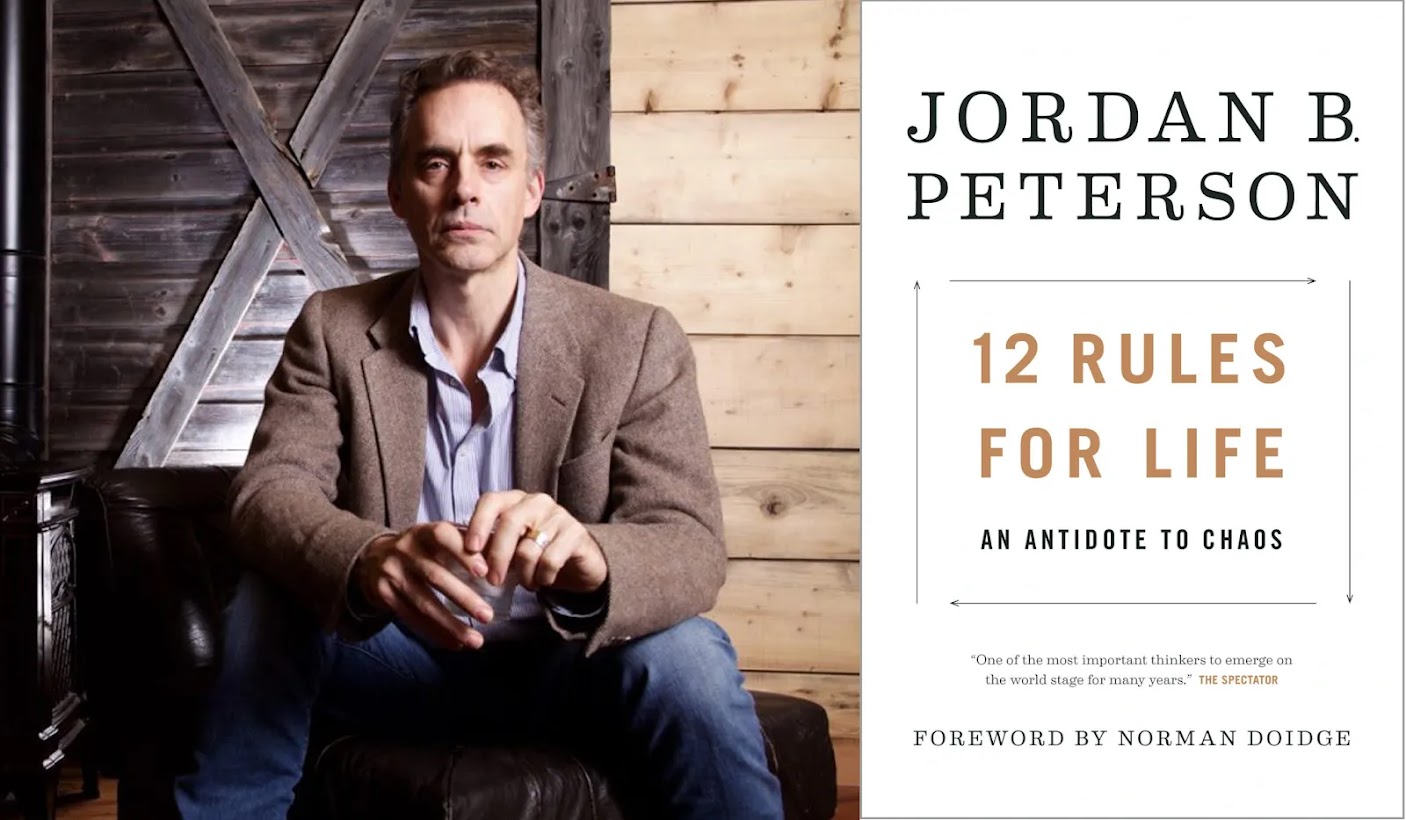 Put Your House in Order

Jordan Peterson doesn’t shy away from controversy or moral certitude as he posits 12 rules for life.

Readers may be put off by Jordan’s references to God and philosophy, not to mention his controversial remarks about men and women and his thoughts on disciplining children with force. But Peterson never lacks sincerity and his message is clear: You must accept responsibility for your life.

The Observer said, “Peterson can take the most difficult ideas and make them entertaining. This may be why his YouTube videos have had 35 million views.” The Guardian called Peterson, “One of the most eclectic and stimulating public intellectuals at large today, fearless and impassioned.” And The Times wrote, “You don’t have to agree with [Peterson’s politics] to like this book, for once you discard the self-help label, it becomes fascinating. Peterson is brilliant on many subjects.”

Peterson’s 12 rules for life are:

Genres
“Stand Up Straight with Your Shoulders Back”
“Treat Yourself Like Someone Who Deserves Your Help”
“Make Friends with People Who Want the Best for You”
“Compare Yourself to Who You Were Yesterday, Not to Who Someone Else Is Today”
“Do Not Let Your Children Do Anything that Makes You Dislike Them”
“Set Your House in Perfect Order Before You Criticize the World”
“Do What Is Meaningful, Not What Is Expedient”
“Tell the Truth. Or, at Least, Don’t Lie”
“Assume that the Person You Are Listening to Might Know Something You Don’t”
“Be Precise in Your Speech.”
“Leave Children Alone When They Are Skateboarding”
“Pet a Cat When You Encounter One on the Street”
Complexity Made Comprehensible
About the author
Video and Podcast

“Stand Up Straight with Your Shoulders Back”

Peterson believes people must stand up to aggression and defend themselves. Renouncing oppression, he avows, is a moral imperative; you must take on the burden of existence.

Peterson compassionately recognizes that feelings of shame and unworthiness are primal aspects of humankind’s collective psyche.

You deserve some respect. You are important to other people, as much as to yourself…You are therefore morally obliged to take care of yourself. – Jordan Peterson

People have a tendency to think poorly of themselves and carry dark thoughts and uniquely terrible desires. Despising yourself isn’t virtuous, he preaches, it’s a form of oppression and bullying. Instead, take better care of yourself.

“Make Friends with People Who Want the Best for You”

Peterson advises you to leave bad friendships and surround yourself with people who support your aspirations, hold you accountable and praise your efforts. As throughout the book, Peterson urges you to find and rely on your own strengths.

“Compare Yourself to Who You Were Yesterday, Not to Who Someone Else Is Today”

To organize and articulate your priorities, see your life for what it is, Peterson suggests. He is adamant that you can overcome nihilism. Decide that you have something better to do with your life, he states, because you do.

Normal kids test boundaries, either by spontaneous or deliberate acts of aggression. Peterson says the obvious aloud: Parents are responsible for teaching their children right from wrong and making it clear that aggression isn’t socially acceptable. Parents must support one another at all times in this process, but, he warns, they must not – as they commonly do – abuse their authority.

The input of the community is required for the integrity of the individual psyche. To put it another way: It takes a village to organize a mind. – Jordan Peterson

Have rules, but keep them to a minimum. Begin by using the minimum necessary force to regulate your children. But, he says, apologize to your kids when you wrong them – whether accidentally or intentionally. Remember that you are their model. This confusingly contradicts Peterson’s repugnant advocacy of violence in the name of discipline.

Rendering your children competent in the face of inevitable danger, tragedy and rejection is far more responsible than protecting them, Peterson teaches.

“Set Your House in Perfect Order Before You Criticize the World”

Peterson tells you to perceive your flaws honestly, and gird yourself for life’s inescapable tragedies. Your upbringing need not define your adulthood. In his view, your will is the strongest force for good in your life.

Set your sights on the Good, the Beautiful and the True, and then focus pointedly and carefully on the concerns of each moment. – Jordan Peterson

“Do What Is Meaningful, Not What Is Expedient”

Survival depends on cooperation and, Peterson counsels, delayed gratification. He prioritizes finding meaning in the balance between transformative chaos and pristine order.

Peterson shows genuine insight when he writes that lying manipulates the world to conform to your desires and limits your curiosity, which inhibits your growth. He celebrates self-compassion and admission of your flaws and mistakes. Humans create reality through the gift of transformative speech, he contends, and truth makes that reality livable, renewable and reliable.

The reason people talk to one another, Peterson states, somewhat reductively, is to figure out how they really think. He anoints the listening person as standing in for common humanity. Thus, according to him, the highest form of conversation occurs when everyone seeks to learn and solve a common problem.

“Be Precise in Your Speech.”

When you deny the problems in your life, Peterson notes, they fester and grow. Instead, articulate a problem precisely so you can confront and manage it. His language throughout is clear and simple – manifesting his precise thinking.

“Leave Children Alone When They Are Skateboarding”

Culture has always been oppressive, Peterson acknowledges, but that’s what forms society. To become strong and capable, children must learn independence. When they learn to skateboard or push their limits in other ways, don’t stand in their way or try to protect them “to the point of weakness.” In a highly functioning society, it is people’s competence – not their raw power – that determines their worth.

“Pet a Cat When You Encounter One on the Street”

Peterson argues that when you love someone, it’s not despite their limitations, but because of them. He recommends controlling what you can and accepting what you can’t. To deal with the inevitable crises that life presents, manage them by compartmentalizing.

To the best of my ability, I will act in a manner that leads to the alleviation of unnecessary pain and suffering. – Jordan Peterson

As you walk in your neighborhood, notice the good things, appreciate the moments – however small – when the light gets in. And when you see a cat, he says, pet it. Readers may wonder if Peterson lives out this advice. If so, he must have really scratched-up hands.

Peterson has a rare gift for stating remarkably difficult and even paradoxical philosophical, religious and evolutionary questions so that they seem straightforward and comprehensible. This gift for turning the complicated into the understandable with no loss of complexity makes his thoughts worth reading and re-reading, regardless of your stance on his ideology.

You are by no means only what you already know. You are also all that which you could know, if you only would. Thus, you should never sacrifice what you could be for what you are. – Jordan Peterson

At times, he sounds surprisingly didactic for someone who perceives and reports multiple sides of fundamental life questions. That near-stridency derives from something even more rare in today’s relativistic, volatile times: moral certainty. Peterson believes he is right in a factual, moral and religious sense; his belief springs from his faith. And whether you hold with his position or not, Peterson presents a staunch moral compass as the most necessary human attribute for transcending the uncertainty of current times.

Jordan B. Peterson, PhD, also wrote Maps of Meaning: The Architecture of Belief and Beyond Order: 12 More Rules for Life. He is the co-author of Political Correctness Gone Mad? Along with Stephen Fry, Michael Eric Dyson and Michelle Goldberg.