This reading illustrates how sorting and filtering can help you pinpoint campaign or business-related insights that you can share with stakeholders.

Suppose you have a spreadsheet that contains online sales data, like the one shown in the image below. Recall from the video that a cell in a spreadsheet holds data. Columns are vertical and are labeled alphabetically. Rows are horizontal and are labeled numerically. People refer to cell positions by combining the column and row designation, like cell A2. In the sample online sales data below, cell A2 contains the data, Alexander City. 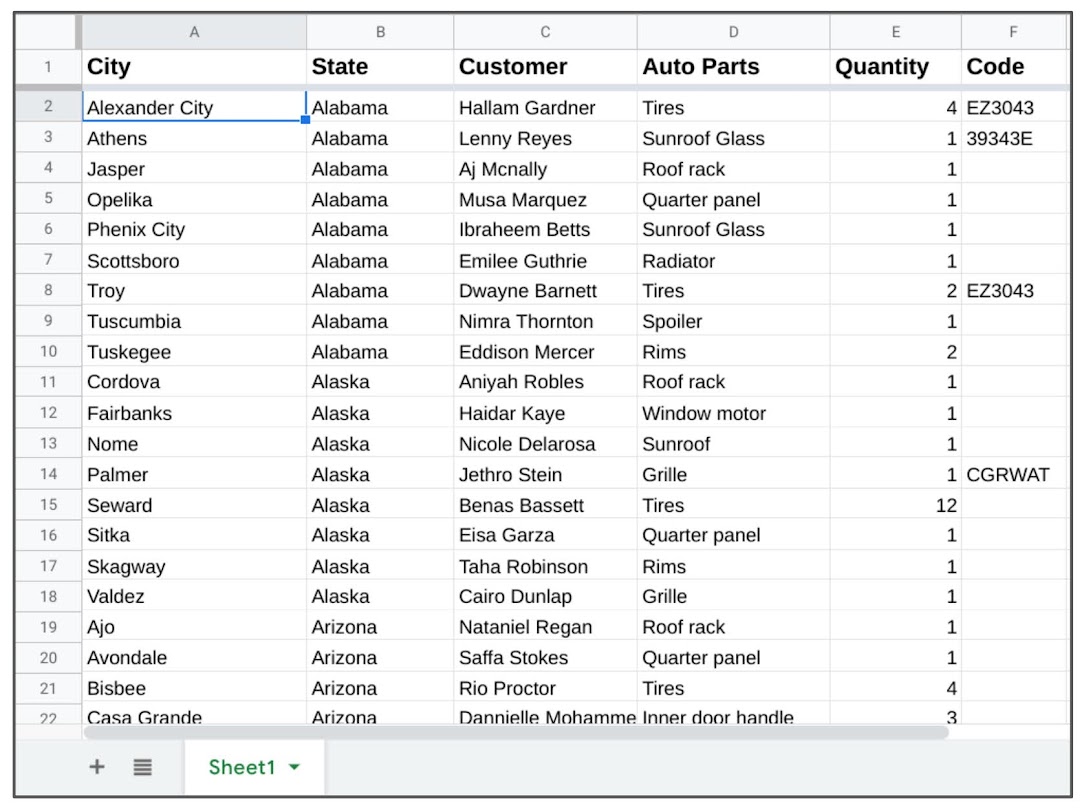 Also recall from the video that sorting can put data in a certain order, and filtering can display data you want while excluding other data. Sorting and filtering in this spreadsheet enables you to gather insights like these:

Example 1: Purchases made from each campaign

1. To determine the number and percentage of purchases made from each campaign, sort the data in the sheet by Column F, which contains a discount code used in each campaign. Sorting in descending order (Z to A) places campaign-related purchases at the top of the sheet followed by blank cells.

Data menu, with Sort sheet, and then Sort sheet by column F (Z to A) selected to sort the codes in descending order. 2. Next, after sorting, create a filter for Column F to display the purchases for each campaign separately by deselecting the other two campaigns. For example, unchecking 39343E and CGRWAT displays only the purchases made from campaign EZ3043.

Filter menu for Column F, with all the codes in a list checked for display. 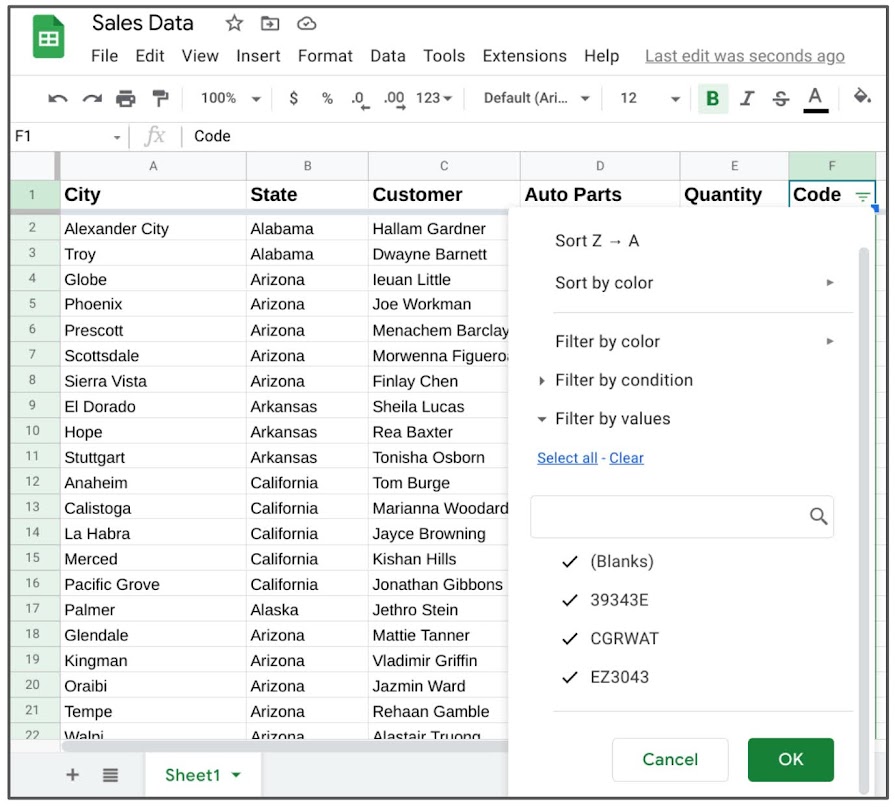 Pro tip: For large datasets, instead of manually counting instances, you can use the COUNTA function in Google Sheets or Microsoft Excel. COUNTA returns the number of non-blank cells in a range. For example, if the data range is F2:F500, enter the following in a blank cell: =COUNTA(F2:F500). The number of cells in the range that contain data (such as a campaign code) is returned in that cell.

Insight you could share with stakeholders: 2.64% of all purchases resulted from Campaign EZ3043.

15 rows of filtered data at the top of the spreadsheet with the code EZ3043 in Column F. 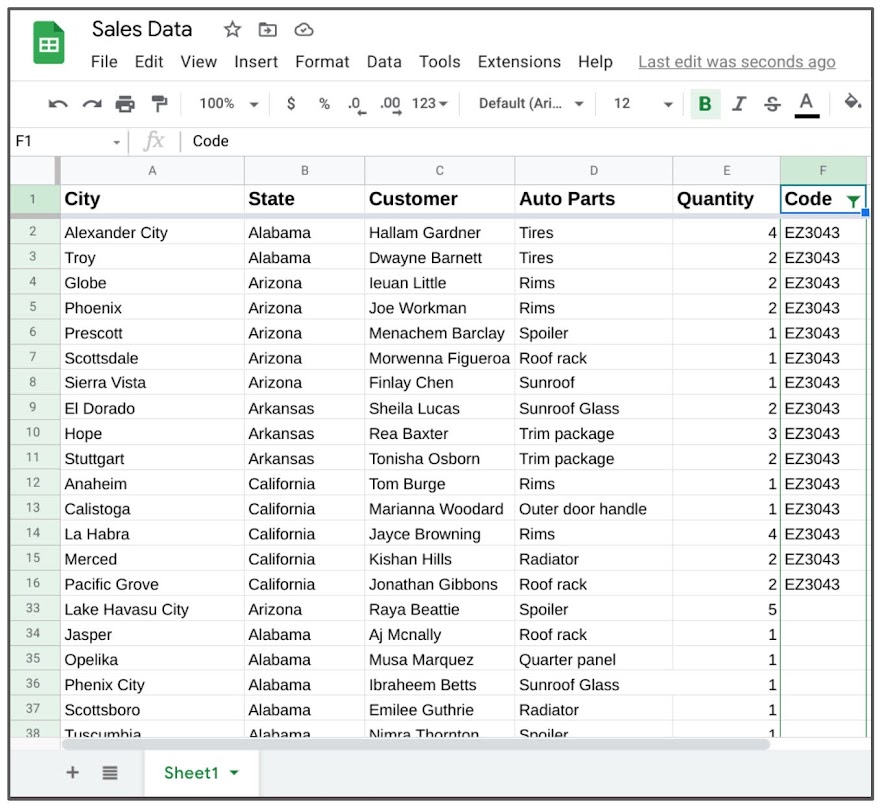 Rows of filtered data at the top of the spreadsheet with campaign codes displayed in Column F. 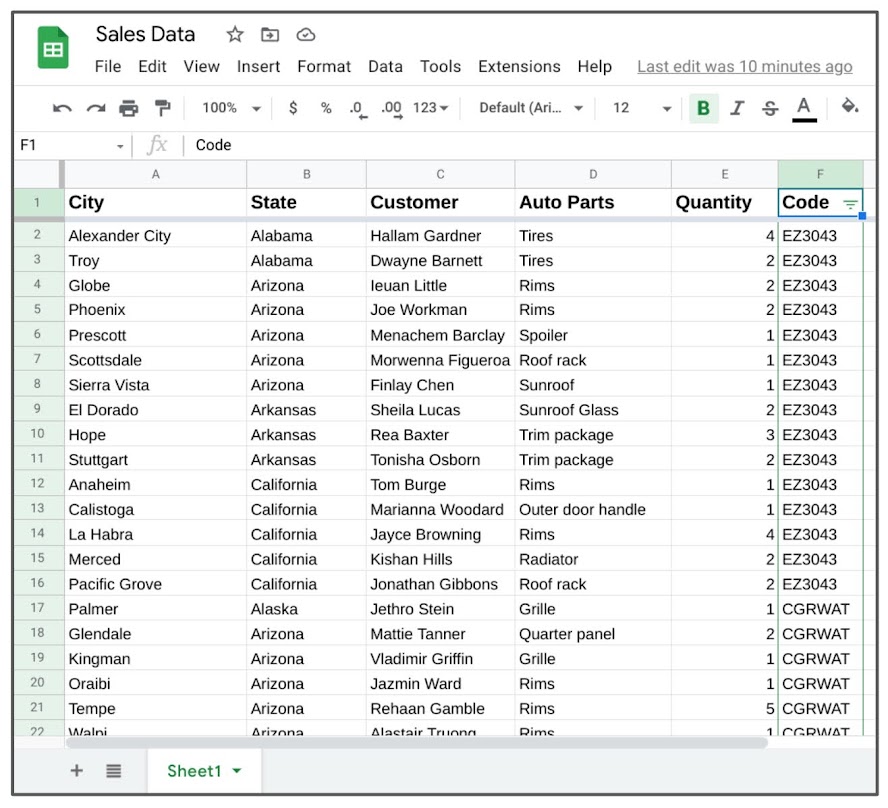 Insight you could share with stakeholders: 10.54% of all purchases were campaign-related.

You could then filter the data by state (Column B) to get the breakdown by state. For example, if filtering for Alabama in Column B displays nine results, two of which are campaign-related, you can conclude that 22% of purchases from Alabama were campaign-related. You would have to repeat the filtering process for each state to complete a state-by-state comparison.

You can refer to the links listed below for more information about sorting and filtering data in spreadsheets.

This site depends on revenue from ad impressions to survive. If you find this site valuable, please consider disabling your ad blocker.