Substack is great — until you outgrow it. Jacob Donnelly started A Media Operator as a newsletter to help people understand how to build a media business, but then realised it took more than just a Substack newsletter to run a business. Plenty of great insights in here.

If you thought that was good, check this out. Rafat Ali gets plenty of mentions in this newsletter because the guy is something of a media startup demigod (and has inspired our thinking behind Splice). He’s written up his lessons in entrepreneurship and starting up here.

Several journalism groups are coming together to help entrepreneurs startup. The Tiny News Collective promises to provide the necessary resources, training, and technology. It wants to launch 500 community news orgs in the next 3 years.

Facebook is building an AI-powered summarising tool called TLDR. It’ll take your article and summarise it into bullet points. Not the kind thing you’d want to hear if you’re a publisher who’s spent thousands of dollars on that long-form article.

News folks are not going to love this. Some product manager announced internally a tool that FB is developing called “TL;DR”. Basically, it will use AI to summarize long form articles and spit out bullet points so people don’t have to read the full piece.

What could go wrong!

Reddit acquired the short video platform Dubsmash, one of TikTok’s biggest rivals. Deal terms weren’t disclosed. “Dubsmash elevates under-represented creators, while Reddit fosters a sense of community and belonging across thousands of different topics and passions. It’s clear that our missions closely align and that our community-focused platforms can coexist and grow as we learn from each other.”

Apple started showing privacy labels in its App Stores. It gives you a snapshot of what data each app collects on you and what they do with it. The labels: Data Used to Track You, Data Linked to You, and Data Not Linked to You, with little snippets to help you understand what’s going on in the background.

With that, the titans are officially at war. Facebook isn’t happy about Apple’s upcoming restrictions on ad targeting and app tracking (because, you know, targeted ad business) and took out print ads in NYT, WSJ, and WaPo declaring it’s “standing up to Apple for small businesses everywhere.” Read more at Facebook Newsroom > Speaking Up for Small Businesses

Meanwhile, Australia’s competition regulator sued Facebook for allegedly misleading consumers about the use of data it was collecting in an app. Onavo Protect, a VPN, apparently told customers it would keep the data private. But instead, Facebook used that data to identify acquisition targets. Read more at ACCC alleges Facebook misled consumers when promoting app to ‘protect’ users’ data

Are you using Google Fonts on your website? You should download them and self-host them for better performance. Even Google says so.

Over 25 years ago, an employee at a car parts factory had a problem to solve: how to make the barcode better. Masahiro Hara happened to have been playing Go, the ancient board game. Factory workers wanted a better way to manage their inventories, and barcodes at the time couldn’t hold more than about 20 alphanumeric characters. Some boxes of components had to have their multiple barcodes scanned individually. Masahiro-san looked back down at the black and white stones on his square Go board and immediately invented the QR code. It’s now used about 1.8 billion times a day…and that’s just China. 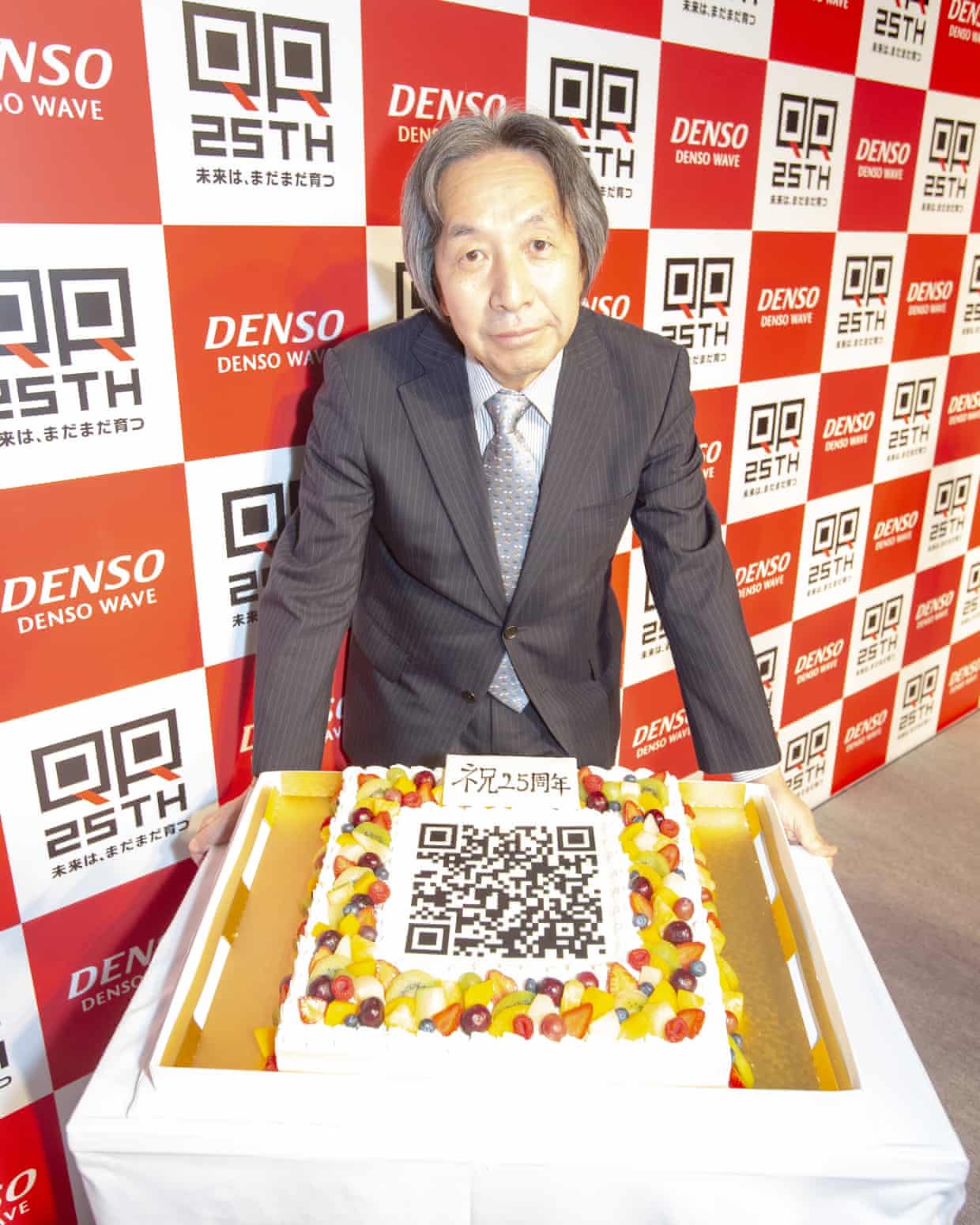 Masahiro Hara came up with a black and white pattern to optimize inventory in the automotive industry.

Let’s say you had a list of companies in your news story, and you wanted to pop in all their logos. All you’d have to do is use a little API to pull the icon of any website or app in. API sources here include Google, Duck Duck Go, and Unavatar. Here’s the Codepen.

Google has a secret API that you can use to show *any* website’s icon on your site 🐳https://t.co/pcHygeE6wd pic.twitter.com/Hv9vvSVZ4V

How many ways are there to make money in media? Over twenty-five, apparently. And that doesn’t count advertising, so you really have no excuse. The meta categories are:

How did Morning Brew scale? By doing things that don’t scale. The Morning Brew newsletter is the “top business news from Wall Street to Silicon Valley, daily.” The co-founder unrolls this thread on how they took what used to be a PDF attachment with 250 readers into viable media biz. Highlights included
Pitching professors for 5-minute spots at their biz school lectures and getting students’ email addresses on pieces of paper, which “took conversion rates from <10% to >75%”, so they launched an ambassador program that replicated this process by working with hundreds of college students at hundreds of campuses across the U.S., and Boom. First 10k subscribers.

1/ I often get asked how @MorningBrew got its first 10k subscribers. So, I’m just going to share some thoughts here:

WarnerMedia is considering building a CNN streaming service. It could come as soon as next year. It’s baffling why something like this has taken so long.

WarnerMedia is also disrupting movie distribution. It’ll release all its movies in 2021 simultaneously on HBO Max. This is a big gamble for the company. Will streaming subs make up for lower box office ticket losses?

Finally, Substack is working on a reader app for its newsletters. “Something that we think about a lot is readers tell us, ‘Hey, I’m subscribed to six different Substacks now, and I want to read them all, and it sucks that they’re in my email inbox along with all my other stuff’.” Sign up for Substack Inbox private beta early access here.

Nasdaq is pushing for new listing requirements that would have listed companies report on the diversity of their boards. It will also require at least one female director and someone from an underrepresented minority. Isn’t it time that media companies started doing the same?

STAT News, a media startup that covers health and medicine, saw explosive growth during the pandemic. Monthly uniques jumped from 1.5 million to 23 million in March. It’s now working on new products, including a data service for subscribers to sort through complicated data sets, like clinical trials data. “We don’t pretend to be the biggest, but we like to think that every day we have stories no one else has about health and medicine that are authoritative and provocative and rigorous and ambitious.”

Wired magazine is available for US$5 — for print AND digital. Cool thread ahead. “Mass-market publications are price dumping because they actually have low value for the individual. They lack a more personalized focus. That’s why they have so much trouble getting people to pay them a higher price. Don’t be like that. Find your niche.”

One thing that makes me really annoyed is the constant price dumping of traditional magazines. For instance, Wired is now only $5 for a full year … getting both print and digital.

In comparison, Baekdal Plus is $9 month … and my price is way too low … yes. Too low! pic.twitter.com/ijZE2hVRY7

The pandemic has claimed Mumbai Mirror, one of India’s most prominent daily city newspapers. The tabloid was known for its fist-in-the-air public service journalism since it started 15 years ago. Now, with its advertising pipeline choked by the virus, it’s pivoting to a weekly format and on digital.

Ikea is ending its printed catalog after 7 decades. It’s taking that budget and moving it into online marketing and other channels instead. Here’s another way to think about it: The catalog was much more than that — it was an aspirational lifestyle magazine. There’s an opportunity here for someone to reinvent it as such.

Nielsen will overhaul its video measurements to provide a comprehensive view across both linear and streaming platforms. Unfortunately, this will only be available in late 2022.