This intriguing study concludes that for all the talk of new world order after the devastating 2007-2009 financial collapse, Wall Street looks remarkably the same. Money and power are concentrated in fewer hands, but the Street’s fundamental philosophy, favoring light regulation and markets dominated by a few huge banks, survives. In this eye-opening account, former chief economist of the International Monetary Fund (IMF) Simon Johnson and former McKinsey & Co. consultant James Kwak argue that Wall Street has gotten what it wants for too long and that the time has come to break up big banks. While the authors cover oft-trod turf, their novel premise that the government must break up the big banks counters conventional wisdom. We recommends this book to taxpayers and policymakers seeking insight into how Wall Street works. 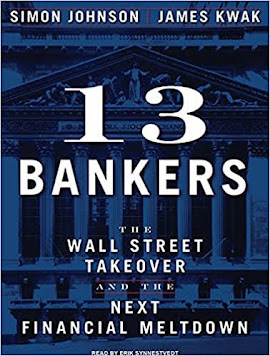 Protecting Bankers from the Pitchforks

Blame for the Great Recession of 2007 to 2009 belongs squarely to Wall Street and the large, powerful banks that took foolish risks and brought down the world economy. Yet, when 13 heads of the U.S.’s dominant banks visited newly elected President Barack Obama in March 2009, they heard little tough talk. Obama did not suggest that their banks should be allowed to fail or that – since they led the economy into collapse – they should lose their jobs. Instead, Obama portrayed himself as a protector of the major banks. “My administration is the only thing between you and the pitchforks,” he told them, referring to public and media anger about Wall Street profiteering.

During his campaign, Obama had called for modest investment bank reform, but Wall Street had lobbied vigorously against it. Now, the banks needed federal help. His audience included the heads of Bank of America (BOA), Citigroup, Freddie Mac, Goldman Sachs, JPMorgan Chase, Morgan Stanley, Wells Fargo, and six other banks. The time seemed perfect for breaking up the big banks or imposing meaningful reform. Obama had as much leverage over them as he ever could hope for, but he decided not to dismantle the system that had spawned the disaster. Instead, he took the bankers’ side, proving the ingrained resonance of Wall Street’s ideology.

“The obvious danger is that, with the passage of time, risk-taking will be encouraged and efforts at prudential restraint will be resisted. Ultimately, the possibility of further crises – even greater crises – will increase.” (former Fed chair Paul Volcker, September 2009)

Wall Street has cultivated the idea that its values – light regulation and fast innovation – reflect those of the nation and the world. Big banks have long bolstered this argument with the typical tools of the powerful: armies of lobbyists and hefty political contributions. They grease the revolving door where executives shunt from the private sector to the public sector. But ideology is their most powerful weapon. When the markets collapsed, politicians began to question Wall Street’s wisdom, but its thinking was so embedded in their hearts and minds that they were receptive to the bankers’ arguments against stricter regulation. Indeed, Wall Street banks are “the new American oligarchy, a group that gains political power because of its economic power, and then uses that political power for its benefit.” This oligarchy exacted a hefty price during the meltdown: millions of jobs lost, millions of homes foreclosed, billions of dollars transferred from taxpayers to the financial sector. The absence of postcrisis reforms means conditions are ripe for another collapse that could be even more severe.

Distrust Dates to the Founding Fathers

American financial power is now synonymous with big banks, but that wasn’t always true. Even before he became the third president, Thomas Jefferson was wary of powerful banks. In the late 1780s and early ’90s, George Washington’s Treasury secretary, Alexander Hamilton, who remained powerful, opposed Jefferson and fought to create the central Bank of the U.S. to manage the government’s money. Hamilton said the fledgling nation’s fragmented financial market must become more sophisticated to enable economic development. Jefferson and his presidential successor, James Madison, formed the Democrat-Republican Party to oppose Hamilton’s Federalist Party and a central bank. Hamilton’s arguments proved accurate, as he pushed the federal government to assume the States’ Revolutionary War debts. His policies generally created a safe, stable environment for banking and investing as the U.S. economy burgeoned. While Hamilton had rightly contended that a central bank would create efficiency, Jefferson was correct in countering that large financial institutions would attain tremendous power.

“The confrontation between concentrated financial power and democratically elected government is as old as the American republic.”

Jefferson feared big banks, but the seventh president, Andrew Jackson, reviled them. He believed paper money let bankers manipulate the economy, and he loathed the way the Second Bank of the U.S. (successor to the Bank of the U.S.) used its fiscal power to influence Congress. His “Bank War” ended with him killing the Second Bank. He vetoed Congress’ effort to recharter it in 1832. In retaliation, the soon-to-be-extinct bank cut loans, contracted the money supply, and sent interest rates soaring. The lack of a central bank didn’t hamper the nation’s entrepreneurial spirit. In the 19th century, it created innovative agricultural tools, and transportation and communication systems. The fragmented banking system may have been inefficient, but the capital still flowed.

“Jefferson and Jackson saw a powerful bank as a corrupting influence that could undermine the proper functioning of a democratic government.”

The Panic of 1907 convinced business leaders that the U.S. needed a central bank. The absence of one, combined with a loosely regulated financial market and highly concentrated industries, seemed too risky. In 1910, a group of big bankers, led by Sen. Nelson Aldrich, hatched a plan to create a central bank. It met with great skepticism and controversy. Louis Brandeis, who later became a Supreme Court justice, and Rep. Charles Lindbergh Sr. warned of nefarious possibilities for investment bankers to consolidate power and enrich themselves. Still, President Woodrow Wilson supported the Federal Reserve Act of 1913. The new Fed did not rule with an iron fist.

“The antiregulatory policies of the 1920s helped make possible…rampant financial speculation, driven by investment banks…that sold and traded securities in an unregulated free-for-all.”

The first Fed seemed built to fail. The mix of Wall Street domination and scant regulatory authority proved poisonous in the 1920s when presidents Warren Harding and Calvin Coolidge pushed deregulation. Their hands-off approach opened the floodgates for bankers keen to engage in risky, speculative trading. The 1929 crash and the Great Depression led to tighter bank oversight. Under Franklin D. Roosevelt, the government took firm control. The Glass-Steagall Act separated investment banks from commercial banks, which held depositors’ money and needed protection from failure. The government set up the Federal Deposit Insurance Corporation to protect banks from collapse, barred banks from expanding across state lines, and gave new powers to the Federal Reserve, such as the ability to regulate savings account interest rates.

With government regulators setting the rules, U.S. banks were not bastions of innovation. Banks followed what became known as the “3-6-3 rule”: Pay 3% on savings, lend at 6%, and hit the golf course by 3 p.m. From World War II until the late 1970s, the U.S. had a remarkably stable banking system. Bank failures were almost nonexistent. The stability ended as deregulation regained its allure, and the quaint views of Jefferson, Jackson, and Roosevelt fell from favor. The first step was the deregulation of fixed commissions for stockbrokers. Vigorous competition replaced the brokers’ comfortable cartel as discounters as Charles Schwab emerged. Then, another domino fell: fixed interest rates on bank accounts. High inflation meant depositors were no longer satisfied with 3% interest rates, so Congress phased out commercial bank interest regulations. Next, the government allowed savings and loans to delve into riskier loans, sparking competition. As regulations fell, new conventional wisdom took hold: the “Efficient Market Hypothesis,” which holds that buyers and sellers take into account all information about prices. In 1970, academic Eugene Fama explained some nuances that tempered this theory, but bankers and politicians embraced the simplistic version. The theory implied that if bankers conducted a transaction, it was – by definition – accurately priced and beneficial to everyone involved.

“The unprecedented amounts of money flowing through the financial sector, increasingly concentrated in a handful of megabanks…the foundation of a new financial oligarchy.”

Margaret Thatcher’s ascent to power in 1979 and Ronald Reagan’s 1980 election made deregulation the dominant financial theme of the 1980s. Reagan and economist Milton Friedman viewed deregulation as an “ideological crusade,” but contrary to Reagan’s wishes, Glass-Steagall survived. The savings and loan crisis stole some thunder from deregulation, but the fall of communism seemed to prove that free-market capitalism could solve the world’s ills. With that, the once-staid bank and broker business model became very exciting indeed.

“Now that loans could be resold to Wall Street, mortgage lending became a fee-driven business, where volume was the key to profits.”

Derivatives came to prominence in the early 1990s when California’s Orange County lost $2 billion on inverse floaters and other transactions. Deregulation advocates such as Federal Reserve Chairman Alan Greenspan lauded derivatives as the unbundling of risk. Although the instruments could be lucrative for those who understood them, they were quite risky for those who did not. Orange County went bankrupt, but Merrill Lynch made $100 million in fees from those trades. With the rise of credit default swaps and other arcane derivatives, Wall Street had a net profit path. Derivatives were the purview of big banks, which had the wherewithal to invest in high-end computers and to hire mathematicians and scientists to create trading strategies. As big banks turned derivatives into money machines, the divide between large and small banks widened. Small banks took deposits and made loans. Big banks pushed into derivatives, proprietary trading, and securitization. A 1994 law that relaxed interstate banking regulations meant that banks, in general, got bigger.

Free of territorial shackles, banks embarked on shopping sprees. For example, by 1998 NationsBank had bought Boatmen’s Bancshares, Barnett Bank, and BOA, emerging with the Bank of America name. A string of mergers of half a dozen large banks created JPMorgan Chase. Banks began to push the limits of Glass-Steagall, as NationsBank bought investment banker Montgomery Securities in 1998 and Chase Manhattan bought Hambrecht & Quist in 1999. Banks became megabanks, accruing huge amounts of money and power.

As they rose in scope, the megabanks leveraged their unprecedented new influence in Washington. Three types of assets enabled the big banks to create their oligarchy:

“If Greenspan said that derivatives improved the management of risk and [that] financial innovation was always good, that provided cover for anyone in Washington who didn’t know what to think.”

“The right solution is obvious: do not allow financial institutions to be too big to fail; break up the ones that are.”

Wall Street gluttony crested in the mid-2000s when investment banks irresponsibly hawked mortgage-backed securities, collateralized debt obligations, and other tools that let borrowers buy more house than they could afford. By the early 2000s, conditions were ripe for new kinds of securities to skew the housing market beyond recognition. Aided by federal policies encouraging homeownership, investment banks offered mortgages to all comers. Wall Street kept its cash cow going by branching into subprime lending. Borrowers took out loans their incomes could not support for mortgages that depended on continued price appreciation. Yet, an International Monetary Fund (IMF) study argued that the subprime frenzy posed a little systemic risk.

“Too Big to Exist”

Then, home prices stopped rising, and things got ugly. Bear Stearns and Lehman Brothers failed, but little changed for the surviving banks. BOA, JPMorgan Chase, Citigroup, Wells Fargo, Goldman Sachs, and Morgan Stanley got bigger. Now, the government must break up and pare down these “too-big-to-fail” banks. This idea is contentious; not even a self-described “reformer” like President Obama embraces it. Yet, to prevent another major collapse, the government must overhaul the banking oligarchy. Support for such a dramatic move seems to be growing. Former Fed chairs Paul Volcker and Greenspan have both suggested the idea, as has the head of the Bank of England, so perhaps it’s not as far-fetched as it sounds.